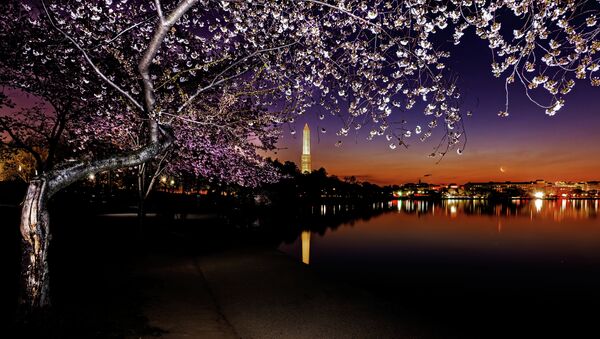 In an op-ed for The American Conservative, journalist Jon Zobenica suggested that the US's political establishment, and especially its right wing, has taken on the ethos of the old USSR and its globalist, revolutionary ideology.

'Russian Menace' Idea Reassures Americans That World Hasn't Passed Them By
Recollecting a trip to the Soviet Union in the twilight of its existence in the late 1980s, Zobenica recalled the crumbling of the communist ideology and the ideals of Soviet exceptionalism in the minds of the Soviet people.

He suggested that the real lesson to be learned from the US's victory in the Cold War came down not so much to the superiority of "our brand of patriotism" or "our brand of ideology," but due to the fact that "we largely eschewed such things, or kept them to a decent minimum, lest they bog us down in the sort of ritualistic affirmations we so readily mocked in the Soviet bloc."

Unfortunately, the journalist noted that now, a quarter-of-a-century following the USSR's collapse, the American political establishment, and especially its right wing, has "increasingly adopted the style of the old Soviet Union, starting with the znachki [lapel pins]."

He recalled that "Reagan didn't wear a flag lapel pin –not when debating Carter, not when debating Mondale, not when negotiating with Gorbachev. Outside the circus atmosphere of a political convention, virtually no one wore flag lapel pins back then. Nowadays they're nearly compulsory in political circles and are a common enough sight on everyone from newsreaders to sportscasters to talk-show hosts: a society-wide assimilation of nationalist kitsch worthy of the USSR and, accordingly, so perfunctory as to have meaning only in absence."

Insouciance Rules The West
The journalist emphasized that more and more, political commentary among the right wing of the American political class is becoming fanatical, jingoistic, and ultimately empty of meaning, exemplified by Sean Hannity's "You're a great American" salutation and by book covers featuring an "abundance of reds, whites, and blues, and titles like 'Let Freedom Ring' and 'Deliver Us From Evil'." This, Zobenica sardonically noted, is "enough to make one appreciate the graceful understatement of old Socialist Realist propaganda."

Zobenica pointed out the nuances of the Fox News network's Orwellian language, saying the 'Fair, Balanced, and Unafraid' and 'No-Spin Zone' slogans are "splendid examples of Ministry of Truth doublethink, insofar as you're supposed to believe them and not believe them at the same time." Fox's spin, he notes, is "delivered with patriotic-hued backdrops, exhilarating denunciations of enemies of the state both within and without, and of course, flag lapel pins."

US Hawks, Neocons Reign Supreme in Washington – US Scholar
Fox's sensibility, according to the journalist, is "a heady cross-purposing of Radio Free Europe and old-school Vremya," a Soviet-era news broadcast, "defending the faith on a cable redoubt from which it can conveniently deprecate as un-American anything the actual American government does or doesn't do."

Reading into George Orwell's 1945 essay 'Notes on Nationalism', Zobenica gleaned that the zero-sum state of mind which has burrowed its way into the Republican political establishment has turned "every day [into] an existential crisis," with "foes foreign and domestic" to be "found who must be vanquished, —or, almost better, perennially and definingly opposed."

The Fox News Republican, Zobenica notes, is a fusion of contempt over various American subcultures and the federal government's supposed inability to handle even basic day-to-day functions, together with an unapologetic belief in America's greatness and exceptionalism, its indispensable role in the world as defender of the "light of reason," brought to others "by example or by force."

Wilsonianism's Aims to Reshape the Planet

Worldwide Net of US Military Bases Encircles the Globe Threatening Security
Zobenica suggests that Washington's adherence to the 'high-minded and idealistic' philosophy of Wilsonian transformative internationalism, epitomized in the present by the neoconservative movement, has "allowed a nation of self-styled reluctant warriors to be one of the great destabilizers of the past 100 years."

Hostile to the ideal of a balance of power and to spheres of influence, the universalist ideology of Wilsonianism has pushed the US to declare "the entire world as our own sphere of influence," and has led to the a revival of the Soviet ideological ideal of the 'permanent revolution': of America's "past involvements" in reshaping other nations' destiny becoming the "pretext for further involvements, whose consequences spur yet further involvements."

Ultimately, the journalist suggests that the US has "managed to out-Lenin Lenin as the most activist, revolutionary force on the planet, one that's ever anxious to shape world events and often successful in doing so. Whether that's something to be glad of, something that will continue to enhance our security and prosperity, is another matter. As the descendants of Lenin could attest, revolutions –homegrown or exported –don't always follow paths of one's choosing."