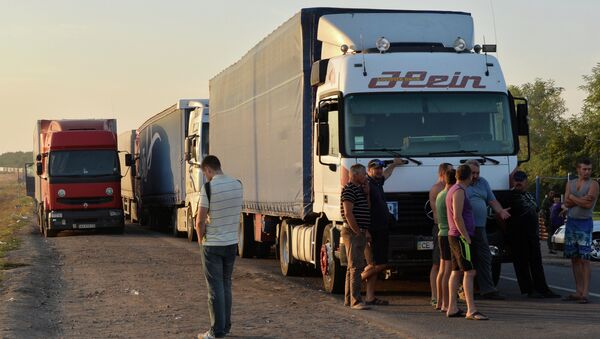 Russia's Federal Border Guard Service says that the truckers carrying food supplies to Crimea stuck at Ukrainian checkpoints are on the verge of rioting. Meanwhile, entrepreneurial-spirited Ukrainians have already found ways around the blockade. At the same time, President Poroshenko finally broke his silence, praising the blockade's organizers.

Truckers carrying food to Crimea stuck at the border in Kherson, southern Ukraine are on the verge of rioting, complaining that their loads are beginning to rot in the heat, the press service of Crimea's Border Guard Service said in a statement released Tuesday.

"According to the accounts of persons crossing the state border, riotous attitudes are developing among truck drivers on the other side of the border due to the perishing food products loaded on their trucks," the statement, cited by Russia's RIA Novosti, reads.

Lots of angry lorry drivers at Chaplina crossing point, who are being told they are not patriots for feeding Crimea pic.twitter.com/JBHN6H9VZE

The border agency added that the Russian side of the border is working normally. Moreover, light vehicles and pedestrians continue to pass unobstructed from the Ukrainian side.

"Kalanchak. All the drivers had their papers checked today."

Entering its third day, the food blockade was initiated by Poroshenko Bloc Rada MPs and self-proclaimed leaders of the Crimean Tatar community Refat Chubarov and Mustafa Dzhemilev, who declared that they were protesting against Russia's discrimination of the Crimean Tatars.

Experts have noticed a rift has emerging among supporters of post-Maidan Kiev over the initiative, with everyone from governors to journalists and social commentators beginning to challenge the blockade's logic and rationale. The blockade's organizers themselves had earlier calculated that 8,000 trucks had carried a total of $475 million worth of food goods to Crimea through southern Ukraine in 2015 alone.

"Kalanchak. Drivers came to try to negotiate with Chubarov."

Meanwhile, Ukrainian media have reported that businessmen are already finding new routes to ensure the delivery of their goods to Crimea. News hub Vesti explained that goods are now being driven north to the region of Kharkiv, where they pass into Russia, are driven around the Donbass war zone, and into Rostov region, where they are loaded onto barges and shipped to Crimea through the Sea of Azov.

Rift Emerging Among Kiev Supporters Over 'Insanity' of Crimea Food Blockade
Moreover, others have found more unconventional ways around the Ukrainian-Crimean border checkpoints, local market workers in Simferopol telling Vesti that a load of tomatoes found its way into Crimea through a secret path through a local cemetery. Naturally, prices on goods coming through the extended and 'secret routes' have skyrocketed.

Speaking to truckers, Vesti noted that some, especially those carrying perishable goods like produce, have begun turning around, desperately trying to sell their goods at local markets.

Locals in Simferopol have said that their markets have not yet felt the effects of the blockade. Speaking to Vesti, a pensioner named Vera noted that "we have enough of everything – fruits and vegetables. Many of our products are locally grown, so we're not complaining. Who knows what will happen next, but Crimea has a lot of agriculture, and I don't think we will starve."

Kiev Hopes to Win Crimeans' Hearts and Minds…by Cutting Off Their Food
On Tuesday, President Petro Poroshenko finally broke his silence over the blockade, suggesting that the initiative will cause the Crimean people to wish to return to Ukraine.

Speaking in the western Ukrainian city of Lviv, Poroshenko said that the blockade "aimed at bringing closer the resumption of [Ukraine's] sovereignty over Crimea."

At the same time, attempting to distance himself from the initiative, the president emphasized that the blockade was the initiative of "social activists of the Crimean Tatar people, while the state services – Ukrainian border guards and the interior ministry, were given the order to ensure the rule of law and the absence of provocations." Poroshenko made the comments despite the fact that both Chubarov and Dzhemilev are members of his ruling parliamentary bloc.

The food blockade's organizers have already called for measures to toughen the blockade with Chubarov saying that he will push for an energy blockade of the peninsula. Ukraine's Institute of Energy Research Director Dmitri Marunych warned that such a measure would hurt Ukraine more than Crimea. Marunych told Vesti that "we have an agreement with Russia by which we buy electricity, and commit to supply electricity to the peninsula. If we suspend the contract now unilaterally, we will face penalties."

In June, Russian authorities began the construction of an energy bridge on the bottom of the Kerch Strait between Crimea and mainland Russia via the Krasnodar Region, aimed at connecting the peninsula to Russia's energy network. Russian energy supplies are expected to begin flowing through the energy bridge early next year.