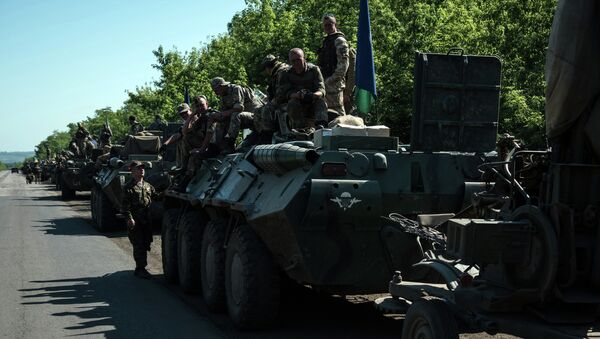 © AFP 2021 / SERGEY POLEZHAKA
Subscribe
OSCE Special Envoy for Ukraine Martin Sajdik said that the Contact Group on Ukraine reconciliation has not reached consensus on the withdrawal of weaponry from the line of contact in Donbass so far.

MINSK (Sputnik) — The Contact Group on Ukraine reconciliation has not reached consensus on the withdrawal of weaponry from the line of contact in Donbass so far, OSCE Special Envoy for Ukraine Martin Sajdik said Tuesday.

The security subgroup started working on a draft document on the withdrawal of weapons with a caliber under 100mm in August.

"The negotiations on the proposed plan of the withdrawal of tanks, artillery with caliber less than 100 mm and 120-mm mortars continued. The sides have not reached agreement on this issue yet," Sajdik told reporters.

DPR Hopes Contact Group Talks Remain Unaffected by NATO Chief Visit to Kiev
According to him, during the seven-hour talks of the Contact Group representatives, the sides agreed that privacy on the issue was important for possible schedule harmonization, including the sequence of the pullout of weaponry and the verification mechanism.

He described the group's talks in the capital of Belarus as "an open, positive and constructive discussion."

The consultations on arms withdrawal will continue in the coming weeks, he added.

The Trilateral Contact Group on the settlement of the crisis in Ukraine, which comprises representatives from Ukraine, Russia and the Organization for Security and Co-operation in Europe (OSCE), was set up in 2014 in a bid to promote a direct dialogue between the conflicting parties.