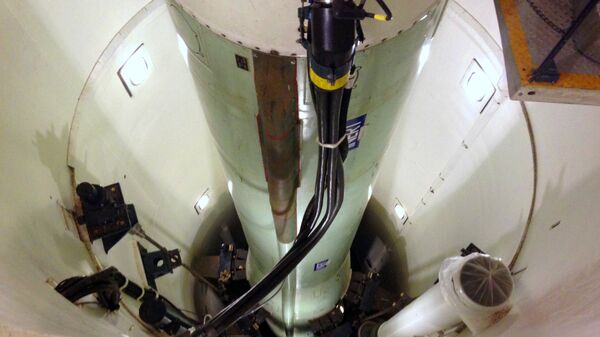 © AP Photo / Robert Burns
Subscribe
Alexander Neu, a member of the Bundestag claims that US plans to modernize its nuclear arsenal in Germany infringe on the Treaty on the Non-Proliferation of Nuclear Weapons.

MOSCOW (Sputnik), Alexander Mosesov — US plans to modernize its nuclear arsenal in Germany infringe on the Treaty on the Non-Proliferation of Nuclear Weapons (NPT), Alexander Neu, a member of the German parliament, the Bundestag, told Sputnik.

Earlier on Tuesday, German media reported that the United States would station 20 B-61 nuclear bombs in western Germany, a line item included in the 2015 US budget.

"I would assess as yes [the US plans violate the NPT], but the German government articulates another position. As far as I can say, the NPT is pretty clear," Neu, Bundestag member from the left-wing Die Linke party and member of the Bundestag Defense Committee said.

US Breaching NPT by Deploying Nuclear Arms in European Countries – Lavrov
The Treaty on Non-Proliferation of Nuclear Weapons has been ratified by some 191 states, including the United States, and entering into force in 1970. It aims to prevent the spread of nuclear weaponry.

"This decision is not a contribution to peace and stability in Europe. The European countries and Germany submit themselves once more to the US foreign and security policy. It is a further backlash for European independence from the US," Neu added.

On July 1, the United States conducted a flight test of a dormant B-61 12 nuclear bomb. The test was conducted as part of the US program to extend the life of the B-61 bomb and modernize its nuclear arsenal.

The test took place only weeks before August 6th, which marked the 70th anniversary of the bombing of Hiroshima and Nagasaki, the only time a country has ever used a nuclear weapon against an adversary.

"The plan for modernization is several years old. But it was not mentioned when the plan would be realized. Now we got the information. It was more or less a secret measure in order to keep the people calm in Germany," Neu said.

According to the ZDF TV channel, the Bundeswehr air base in Buchel in western Germany has begun preparations for receiving the new American B61-12 nuclear bombs. According to the channel, the 20 bombs would have a yield equivalent to 80 times the bomb dropped on Hiroshima.