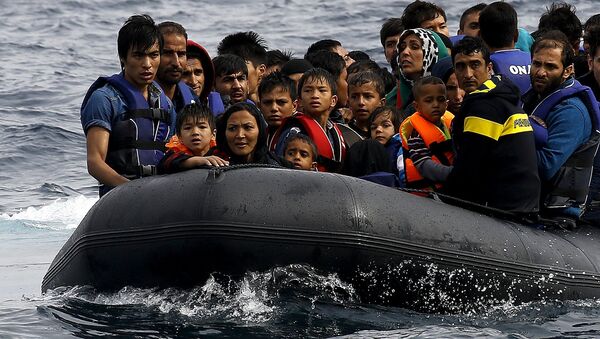 © REUTERS / Yannis Behrakis
Subscribe
The number of undocumented migrants who have entered Europe by sea since the beginning of 2015 is estimated at 481,612, the International Organization for Migration (IOM) said in a statement Tuesday.

Merkel Wants US to Take More Migrants and Stop the Flow Into Europe
MOSCOW (Sputnik) – According to the IOM, Greece and Italy were most affected by the refugee crisis, with 351,088 and 127,605 migrants arriving in these countries respectively.

The report said that at least 2,872 people died or went missing in the Mediterranean en route to Europe in 2015.

A total of over 500,000 migrants and refugees have arrived in the European Union since the beginning of 2015, according to the European Commission. The sea route to Europe is primarily used by those who are fleeing violence and poverty in their crisis-torn countries of origin in the Middle East and North Africa.