'Without Cooperation With Russia, US Is Only a Second Fiddle in Syria' 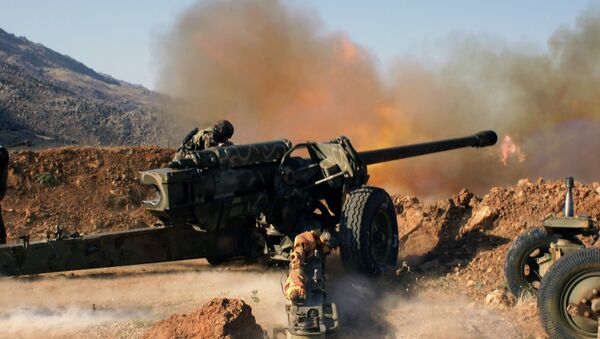 © Sputnik
/
Go to the mediabank
Subscribe
International
India
Africa
The US is in more need of cooperation with Russia in Syria than vice versa, according to the head of the Russian Lower House's International Affairs Committee; without it, Washington will only be able to play second fiddle in the region and will lose the battle for international public opinion.

These comments by Alexei Pushkov come in response to US rhetoric on the need to involve Russia in settling the Syrian crisis.

The Russian politician also commented on yet another urge of US Secretary of State John Kerry to ouster President Assad.

“Kerry has said that a political solution is the only option for settling the Syrian crisis. But if there are talks of ousting Assad, than it is not the solution but merely the stage being set for the victory of the Islamic State,” he tweeted.

Earlier on Sunday, John Kerry said that there is no military solution to the situation in Syria.

“It requires a political solution, and the way forward has always been trying to find common ground with respect to that,” he said at a joint news conference with German Foreign Minister Frank-Walter Steinmeier in Berlin following the talks between the two.

“Now, military pressure is part of the equation, which is precisely why we have put together a over 60-nations coalition to degrade and ultimately defeat Daesh wherever it exists,” he elaborated.

“That is why we’ve also said that there could be no solution without a transition in power, as the Geneva process has affirmed and which Russia has signed up to. It would be delusional to believe that President Assad can ever unite or govern a peaceful Syria, and it would be just as impossible for Daesh or any other violent extremist group, it would be impossible for any of us to conceive of any way in which they should be allowed or possibly come close to governing.”

World
America's New Nightmare: How to Cope With Russia on the Ground in Syria
A similar idea that the US is losing its ground in Syria was voiced by the German magazine Der Spiegel on Saturday.

The outlet supposed that Washington now fears President Putin’s scheduled address at the 70 th Session of the UN General Assembly on September 28, where he is believed to call for an international coalition against the Islamic State, thus seizing the initiative from the US.

Thus, the magazine says, Washington is doing “what was hard to imagine even a few weeks ago: It is coordinating with Russia on a diplomatic and military level.”

The US media also does not exclude negotiations between the Russian and American presidents on the matter.

“President Obama is reportedly considering accepting Vladimir Putin's proposal for US-Russian discussions on Syria,” read a Thursday editorial in the Los Angeles Times. “The dialogue would begin with talks between the two countries' military leaders about recent Russian military activities in that country — in order to avoid what Russia's foreign minister called 'unintended incidents' — but could lead to a meeting between Obama and Putin at the United Nations this month.”

Support for Syria Turning Russia Into a 'Diplomatic Superpower'
“It's tempting to say that the United States should refuse to talk to Putin and concentrate on raising its own military profile in the Middle East as a way of shaping events there. But after protracted and costly wars in Afghanistan and Iraq, Americans understandably lack the appetite for another major military intervention.”

“That is why, even though he promised to 'degrade and ultimately destroy' the Islamic State, Obama said he wouldn't commit ground combat forces. Instead, he said last year, he would 'rally other nations' to join the fight. It's at least worth exploring the possibility that Russia is willing to be one of them.”