Hot Air? US Military Has Steered Clear of S. China Sea Islands Since 2012 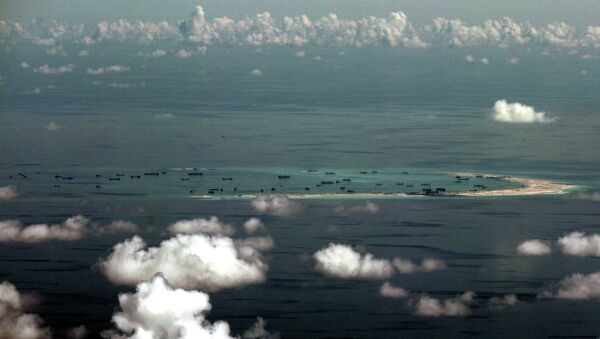 © AFP 2023 / POOL / RITCHIE B. TONGO
Subscribe
International
India
Africa
As Beijing continues to assert sovereignty over its artificial islands in the South China Sea, US officials have pushed for new plans to flout China’s territorial claims. But since 2012, Washington has fastidiously avoided the islands, suggesting that the latest threats may just be hot air.

Asia
China’s New Airstrip to Boost Anti-Submarine Defense, Much to US' Chagrin

Those comments came in response to Beijing’s construction of airstrips on its artificial islands in the Spratly archipelago. Despite the fact that China has repeatedly asserted its right to build within its own territory, the US has expressed concerns that Beijing may use the islands to cut off access to international waters.

Carter’s statements have been echoed by other US military officials. Eager to demonstrate that Washington does not recognize the islands as Chinese territory, both Admiral Harry Harris and Assistant Secretary of Defense for Asian and Pacific Security David Shear have suggested sending the US Navy within 12 miles of the Spratlys.

But US opposition to China’s land reclamation projects is nothing new, and as US Senator John McCain pointed out last week, Washington has not acted on similar threats, and has even worked to avoid the Spratlys since 2012.

"We sail and we fly and we operate within that area on a daily basis," Shear said before the US Senate Committee on Armed Services last week, according to Breaking Defense.

Asia
Stay Calm Uncle Sam: US as Outsider Has no ‘Territorial Dispute With China’

"But you haven’t operated within 12 miles of these reclaimed features, have you?" McCain asked.

"We have not recently gone within 12 miles of a reclaimed area," Shear admitted. "I believe the last time we conducted a freedom of navigation operation within 12 nautical miles of one of those features was 2012."

Following the admission, the legislator penned a letter to the Obama administration arguing for the military to conduct operations within that 12-mile territorial limit.

"Continued failure to actually exercise that right [to go within 12 miles] could be interpreted as de facto acceptance of Beijing’s destabilizing behavior," the letter reads. "We believe that a firm response from the US government, including the highly symbolic passage of American ships and aircraft through the waters and airspace illegitimately claimed by China, is needed…"

Beijing has already expressed concern over provocative US actions in the South China Sea.

A highly contested region through which nearly $5 trillion in trade passes annually, China lays claim to most of the South China Sea. There are, however, conflicting claims from the Philippines, Taiwan, Brunei, Vietnam, and Malaysia.

China has repeatedly asserted its right to build within its own territory, and stressed that while the artificial islands will be used for some military operations, they will largely focus on humanitarian operations.

Asia
Let’s Pretend: What Happens If the US and China Clash in the Pacific?

"China fields a very modern military and a growing capability and capacity, [but] we have a technological edge over them in almost every way, if not in every way," Harris said.

"I’m confident of our ability to take the fight to China if it should come to that."

But a report released by the RAND Corporation last week argues the exact opposite. Analyzing and comparing the military capabilities of both the US and China, the report recommends that the US reconsider its military dominance.