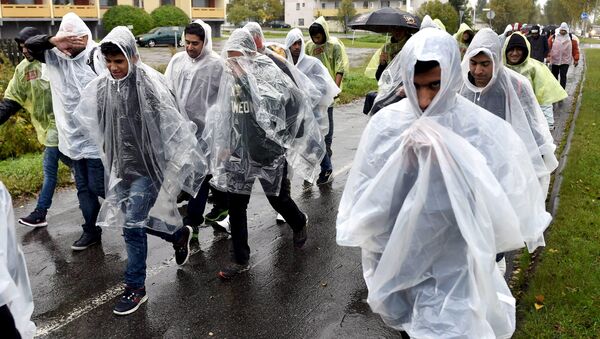 Amid anti-immigration protests, Finnish authorities said they have begun to impose controls at the border with Sweden as a result of the influx of people who have entered Finland this year.

Finland to Toughen Migration Policy Amid EU Refugee Crisis
Finnish police began checking people who arrived across the border with Sweden on Saturday, due to a rapid rise in the number of refugees and migrants entering the country.

"From now on, people crossing the border in Tornio will have their documents checked by the police," stated the Finnish Interior Ministry.

The northern Finnish city of Tornio forms a cross-border twin city with the town of Haparanda in Sweden; together they have 32 500 inhabitants.

The system of border cooperation between the towns was established so that the region could "enjoy the benefits of two countries but address the obligations of one country," according to the Finnish administration of Lapland.

Swedish Foreign Minister Diagnoses Finland With Refugee Amnesia
The Finnish authorities' order to impose more stringent controls at the border came as hundreds of people held an anti-immigration protest in the center of Tornio, and formed a human wall to express their opposition to migration.

"We oppose so many asylum-seekers coming to Finland," one couple at the demonstration told Finnish broadcaster YLE.

"We have only seen men, no families. These are welfare refugees and that is why we are protesting," explained another protestor.

Earlier this month YLE reported that up 300 people illegally cross the border into Tornio every day.

According to official figures released last week, 11,263 people have sought asylum in Finland so far in 2015. The Interior Ministry expects 30,000 asylum seekers to reach Finland this year, almost ten times the 3,651 people who claimed asylum in Finland in 2014.