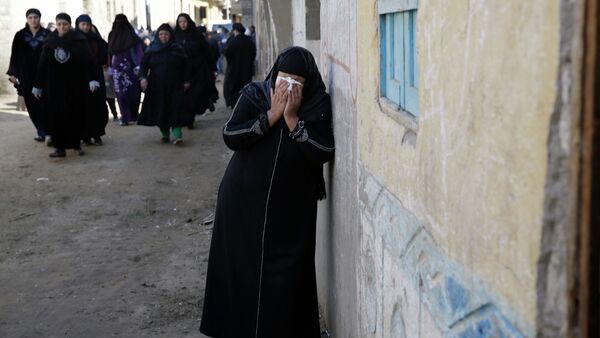 Christian Freedom International, a humanitarian aid organization that supports persecuted Christians, has calculated that a Christian is martyred for their faith every five minutes.

Glenn Beck: I'll Smuggle Syrian Christians Into US With Help of Former CIA
Christians have become the most persecuted faith group in the world as a result of the persecution they face in 105 countries across northern and western Africa, the Middle East and Asia, according to aid organization Christian Freedom International.

CFI president Jim Jacobson said that much of the persecution against Christians is carried out in the Middle East by Islamic State militants.

"Islamic State militants in Iraq are using Christian churches as torture chambers where they force Christians to either convert to Islam or die," Jacobson told Breitbart.

"Islamic State militants are also stripping the former places of Christian worship of ancient relics which in turn are smuggled to Western collectors to help fund their terrorist activities."

Islamic State militants are known to have carried out mass evictions, forced migrations and killings of Christians and other religious and ethnic groups such as Yezidis, Kurds, Turkmens and Shabaks.

Members of the terrorist organization have publicized a number of their attacks on Christians, including the kidnapping and beheading of 21 Egyptian Coptic Christians in Libya in February 2015, and 30 Ethiopian Christians in April 2015.

Other militant Islamic groups have also targeted Christians for systematic persecution. In April 2014, 276 Christian schoolgirls were kidnapped by Boko Haram militants from their school in northern Nigeria, and more than 200 are believed to remain imprisoned.

Over 15,000 Christian Families at Risk in Northeast Syria
In April 2015 al-Shabaab militants stormed a dormitory complex at Garissa University College in Somalia, during a Christian prayer service. Non-Muslim students were targeted in the massacre, in which the terrorists killed at least 147 people.

The CFI, a humanitarian aid organization which supports those persecuted because of their faith, has calculated that more Christians have been martyred in the 20th and 21st centuries alone than during the previous 19 centuries combined, and that every five minutes, a Christian is martyred for their faith.