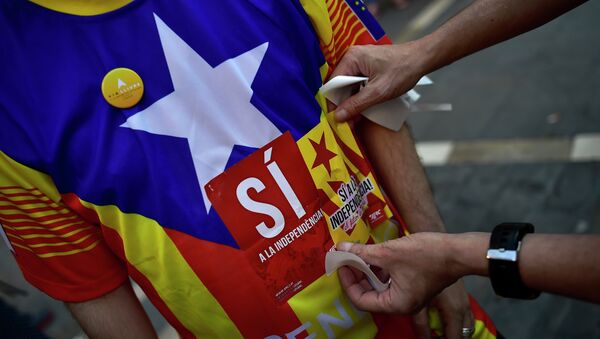 © AP Photo / Alvaro Barrientos
Subscribe
The Catalan Solidarity for Independence coalition has a common program "to seek independence for Catalonia in the next 18 months," according to a coalition spokesperson.

EU 'Will Force' Spain to Recognize Catalonia as Independent State
MOSCOW (Sputnik), Anastasia Levchenko – Catalan Solidarity for Independence, an electoral coalition in Catalonia, is confident that independence supporters will win a majority of seats during September 27 election, the coalition’s spokesman told Sputnik Sunday.

On September 27, Catalonia will hold a "plebiscitary" parliamentary election. If independence supporters get a majority of seats, the election will become a de-facto vote on Catalonia's independence. The joint pro-independence coalition Junts Pel Si (Together for Yes) has already declared that the road to the actual independence begins on September 28.

"We have confidence that we will win these elections. We have made some changes [since previous elections], we converted regional elections into a plebiscite, because we joined all together, all the independence parties, without caring if we are from the left or from the right side, in one single party to participate in these elections together," Jose Enrique Folch said.

According to him, the Catalan Solidarity for Independence coalition has a common program "to seek independence in the next 18 months."

After the independence supporters come to power, Catalonia will make a declaration of independence and start negotiations with the international community and other states on the issue of recognition, Folch explained.

Hundreds of Thousands of Catalans Join Rally in Barcelona
As for the EU membership, it is not in the interest of the European Union and the eurozone that Catalonia, with 7-million population and numerous economic entities, exits the bloc, Folch said.

"We are producing 21 percent of taxes that the whole Spain collects. From this 21 percent, 50 percent goes to Spain and never returns to Catalonia. It means that we are helping to pay the international debt of Spain, which is almost 1 billion euro [$1.1 billion]," Folch said.

However, Catalonia's membership in the EU bloc can only be discussed after the region becomes independent, the coalition spokesman said.

On Sunday, Moscow is holding an international anti-globalist conference "The dialogue of nations. The right of people to self-determination and building of the multipolar world."

In the framework of the conference, independence supporters from all over the world are expected to prepare an appeal to the United Nations against the unipolar nature of the modern world.