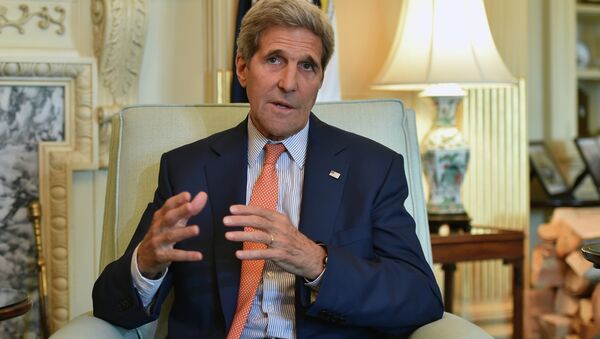 US State Secretary John Kerry said that the US is willing to negotiate with the Syrian government to resolve the Syrian conflict without the Syrian president's removal as an apparent precondition.

US Secretary of State John Kerry said that the US is willing to negotiate with Syrian President Bashar al-Assad to resolve the Syrian crisis.

The statement is the first time that the US has stated that it is willing to negotiate with the Syrian president on the issue. The Syrian conflict, in which the country has since 2011 battled rebels backed by the US diplomatically and later militarily, has led to numerous political and humanitarian crises from the rise of the Islamic State group to Europe's refugee crisis.

"We need to get to the negotiation. That is what we're looking for and we hope Russia and Iran, and any other countries with influence, will help to bring about that, because that's what is preventing this crisis from ending," Kerry said on Saturday as cited by Reuters.

Kerry added that while the US is still seeking to remove Assad from power is a sticking point, it is now apparently willing to allow negotiations to come first.

"[It] doesn't have to be on day one or month one…there is a process by which all the parties have to come together to reach an understanding of how this can best be achieved," Kerry said.

Previous attempts at negotiating between some factions of rebel groups and the Syrian government in 2012 and 2014 ended with deadlock as the US demanded an agreement that would see Assad's removal from power before further attempts at mediation are made.