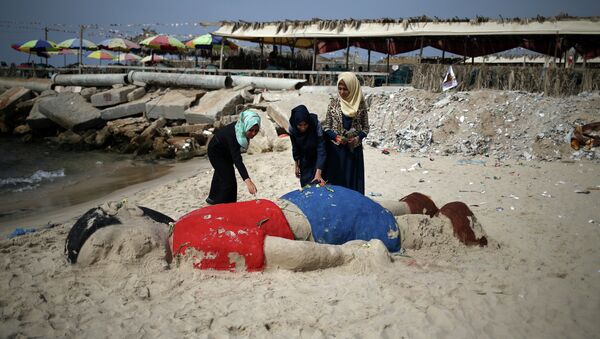 © AFP 2021 / Mohammed Abed
Subscribe
Charlie Hebdo received an award for their outstanding contribution for the struggle and development of freedom of speech amid vast criticism over a caricature depicting a drowned Syrian boy.

The magazine received an award called the M100 Sanssouci Colloquium. It was initiated in 2005 by a group of leading media and public figures when Potsdam was running for European Capital of Culture 2010.

Such a high award, issued by the German city of Potsdam, was awarded for “outstanding contribution for the struggle and the development of freedom of speech.” The jury consisted of writer Ferdinand von Schirach and German Foreign Minister Frank-Walter Steinmeier.

All about freedom of speech, but Charlie Hebdo have gone way too far with this cartoon of Aylan Kurdi pic.twitter.com/y2BLASWOOS

Charlie Hebdo’s editor-in-chief Gėrard Biard upon receiving the award said that the publication has earned the award, as he had to endure a lot of hardships on the way of upholding democratic values: the magazine has undergone harsh criticism of the cartoons depicting the Syrian boy who drowned while fleeing Syria amid the refugee crisis.

Father of Drowned Syrian Child 'Shocked' by Charlie Hebdo Caricature
It seems ironic that the award to Charlie Hebdo was presented in Germany by a German government official just after German Chancellor Angela Merkel’s criticism of European xenophobia amid the refugee crisis.

Germany has been the most receptive to refugees, yet there is a growing minority protesting the sheer volume Germany is taking in — predicted to be one million by the end of this year. Merkel however told German newspaper Tagesspiegel:

“If we now have to start apologizing for showing a friendly face in response to emergency situations, then that's not my country.”

Charlie Hebdo’s ‘friendly face’ in response to emergency situations, the depiction of a drowning three-year old Syrian boy, has just gotten them an award.

“Satire is to provoke shock,” said Biard during the award presentation. He further added that the recent caricature received vast criticism but satire should not be treated like this because it reflects the reality.

Representative of the Russian Foreign Ministry Maria Zakharova criticized the caricature of the Syrian boy on her Facebook page. According to her, the publication is deceiving itself and the readers claiming that humor has no taboo topics. She further added that Islam is a religion that prohibits murder. By ridiculing Islam, Charlie Hebdo is sending a crushing blow to its own theories.

000000
Popular comments
Aon Duine, So you will except everything throw down your throat as long as it does not effect you personally? That's a nice humanly point of view you have there, keep it up.