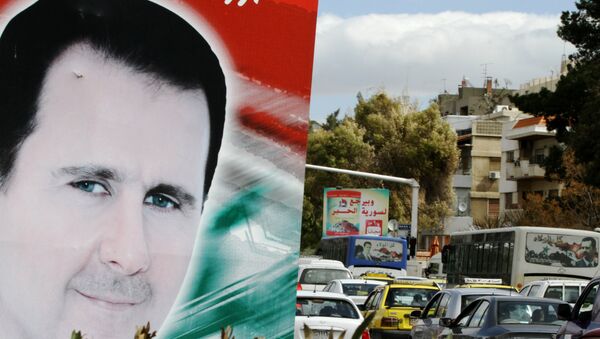 Partnering with Russia offers the United States an opportunity to defeat ISIL in Syria, but any military cooperation could be completely undermined by the disagreement over Syrian President Bashar Assad’s political fate, experts told Sputnik.

WASHINGTON (Sputnik) — US officials have stated they are considering a Russian proposal to collaborate on a military solution in Syria to counter ISIL. The United States, however, has continued to demand that Assad cannot be part of any political settlement in Syria.

"If there is a de facto coalition brewing to knock out ISIS [Islamic State], Russian forces operating in ‘Levantine Syria’ could open the way for the United States to feel free in at least inserting SOCOM [US Special Operations Command] units into Syria for targeted operations," Vlahos said.

If Russia’s proposal for military cooperation with US forces actually works, Washington can achieve its goal of defeating ISIL and Moscow "can boast that they recreated [the] World War II grand alliance," Vlahos argued.

US Needs Russia to Defeat ISIL Despite Mid-East Allies' Opposition
Vlahos posited that Russia could also benefit from this cooperation by getting America’s genuine "buy-in" regarding Donetsk and Lugansk autonomy in Ukraine.

The expert also noted that the anti-Islamic State military solution hinges on whether the United States and Russia can overcome their differences, including the fate of Assad, among other issues.

"A lot depends on whether [Russian President Vladimir] Putin and [US President Barack] Obama can ‘bury the hatchet’ at the [UN] General Assembly next week," Vlahos suggested.

Woodrow Wilson Center scholar Michael Kofman told Sputnik that US-Russian military cooperation is not even a "functioning premise" largely because of disputes over what the end game looks like in Syria.

"Russia and the United States cannot cooperate because they and their allies have a basic disagreement on the end-state," Kofman argued. "The United States does not want to discuss the settlement unless Assad agrees that he will step down."

Kofman suggested that Russia’s military buildup could complicate US efforts to implement a no-fly zone in northern Syria.

Last week, President Putin confirmed that Moscow was providing considerable support to Syria in equipment, weapons and training to fight ISIL and other terrorist groups.