Migrant Crisis Will Plague Europe 'For Many Years to Come' - Tusk 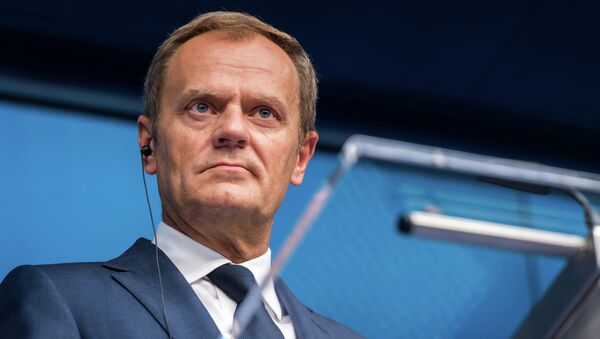 European states must stop shifting blame for the migrant crisis and need to find a common solution to the problem instead of sealing off national borders, European Council President Donald Tusk said in an invitation letter to the upcoming informal summit that will take place in Brussels on September 23.

MOSCOW (Sputnik) – The EU council president admitted that Europe is not able to manage its external borders amid an influx of refugees from conflict-torn countries in the Middle East and Africa.

"The crisis we are all witnessing is a test of our humanity and responsibility. It causes many tensions and accusations among politicians and people in Europe. I have no illusions that Europe will need to deal with this challenge for many years to come," Tusk said in the Friday statement.

"The protection of the European community is our first duty and obligation and we have failed on this front. For too long our discussions have centred around shifting the responsibility onto others. There is a long list of issues where we could blame one another but it will not help us in finding a common solution," Tusk stressed.

The European Council president urged all EU member-states to avoid shifting blame and to seek common solutions to the migrant crisis through open, transparent discussion that does not "obscure the brutal reality."

The European Union has been struggling with an influx of refugees as hundreds of thousands try to enter the bloc, fleeing violence and poverty in their crisis-torn countries in the Middle East and Africa.

EU Should Fund Refugee Camps in Jordan, Turkey, Lebanon - Hungarian FM
Some 500,000 people have arrived in Europe since the beginning of 2015, many from Syria, according to European Commission President Jean-Claude Juncker.

Many migrants used Serbia as a transit zone to Hungary and further to wealthier EU countries before the Serbian-Hungarian border was closed on Tuesday and Hungary’s government introduced penalties for border infringements.

The migrants’ route then shifted to Croatia, Slovenia and other neighboring countries.