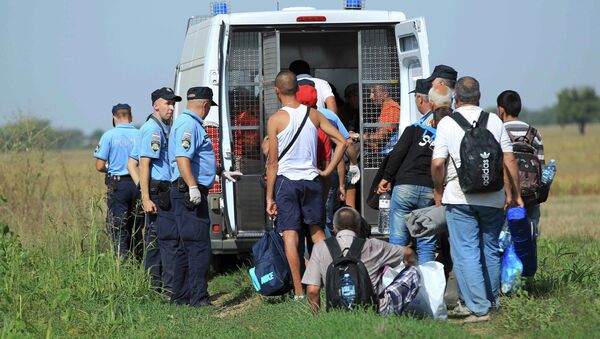 © REUTERS / Antonio Bronic
Subscribe
Hungary has intercepted a train accompanied by around 40 Croatian police officers that was carrying some 1,000 refugees, RT reports.

BUDAPEST (Sputnik) – The officers were sent back to Croatia, while the migrants on board the train were reportedly transferred to a reception camp, RT said on Friday.

Croatia’s Interior Ministry admitted on Friday that the incident did take place, stressing that contrary to some media reports the Croatian police officers were not detained and crossed the border with Hungary back into Croatia on Friday evening.

European Commission President Supports Croatia Amid Migrant Crisis
Croatian Interior Minister Ranko Ostojic said on Friday as cited by the Vecernji list newspaper that the Croatian side was convinced that there was an agreement with the Hungarian side on the issue and that Hungary deliberately made it look like armed Croatian policemen violated rules.

On Friday, Croatian Prime Minister Zoran Milanovic said that his country was no longer capable of registering and housing all the refugees arriving there, and therefore had decided to start sending them to its external borders by bus.

Local reports said on Friday that at least 23 buses with about 1,700 migrants had arrived in the border area, accompanied by the Croatian policemen.

Milanovic said earlier on Friday that around 14,000 migrants had arrived in Croatia in just two days, highlighting his country’s dire situation amid the inflow of refugees from conflict-torn areas in the Middle East and Africa that Europe has been struggling with.

Hungary’s Foreign Minister Peter Szijjarto said on Friday that Croatia’s decision to transport migrants to external borders amid the influx, particularly to its Hungarian border, was unacceptable.

Thousands of migrants from North Africa and the Middle East used to come to Serbia using it as a transit country on their way to Hungary and further to wealthier EU states.

Over 17,000 Migrants Enter Croatia Within Three Days
The closure of the Serbian-Hungarian border and the penalties introduced on Tuesday by the Hungarian government for border infringements have forced thousands of migrants from Serbia to reroute through Croatia and Slovenia.