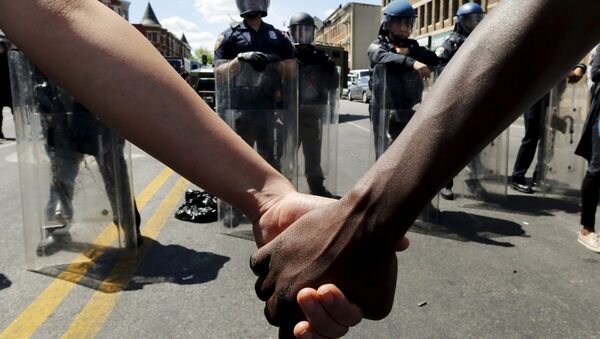 © REUTERS / Jim Bourg
Subscribe
On Friday morning, the Washington Post reported that “over 700 people” have been shot and killed by police in the United States so far this year. If one accounts for all deaths at the hands of US police however, that number shoots up to 851.

In fact, 51 people have been killed by police in the month of September alone, according to the comprehensive database at killedbypolice.net, and there are still a dozen days left until October.

Fewer than half of all those sent to early graves by police this year — 402 — reportedly had a gun, according to the searchable database project The Counted, created by The Guardian.

At least 211, or approximately 25% of those killed, were black, even though they make up only 12.6% of the United States population.

At least 14 of those that have fallen at the hands of cops this year were minors, some as young as 15 years old.

The North East appears to have the lowest rates of deadly police violence.

There has not been a single person reported killed by police in the state of Vermont. There have been one each in Rhode Island and Maine, three in Connecticut, and 10 in Massachusetts.

California leads the nation in police deaths, with 141 reported by September 18.  Texas comes in second with 84.

Second Video Shows Texas Cops Fatally Shooting Man With his Hands Up
When looking at deaths per capita on the other hand, Oklahoma takes the lead, with 34 this year in the state with a population of 3,850,568.  New Mexico comes in second, with 15 killed out of a population of 2,085,287.

Meanwhile, according to the Officer Down Memorial page, which tracks police officers who die on duty, 26% fewer police have been shot and killed this year compared to last, with 26 confirmed deaths.

Several of the deaths were at the hands of other cops.

If the right-wing mainstream media is correct, and there is a “war on cops” in the United States, it seems pretty obvious who’s winning.