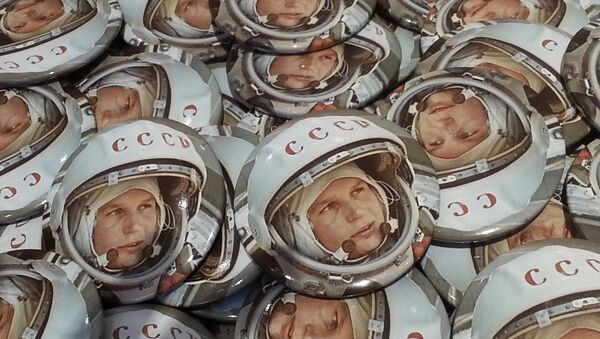 Four years in the making, the exhibition ‘Cosmonauts: Birth of the Space Age’ has just opened its doors to the public. It brings together “the crown jewels” of 20th-century Russian space objects, illustrating achievements that, for the West, got lost in the publicity around Apollo.

It’s an exhibition that brings Space down to Earth with the simplicity and humanity of its visual story-telling.

Here is the impossibly small Vostok 6 capsule – not a replica, the actual one – that brought Valentina Tereshkova, the first woman in Space, back into the Earth’s embrace after her three-day orbits of our planet in June, 1963.

Just over there is another descent capsule, the Voskhod 1, which makes Tereshkova’s look positively spacious: three men were crammed into that one.

“It’s amazing,” said Joao, a young Brazilian on his way to study mechanical engineering in Bristol. “They just threw this, this… giant ball up into Space, with really no technology to speak of, and said, ‘Hey, it’ll be okay, they’ll come back’. And they did!”

Gazing into the rudimentary interior of the burnt shell, with its three small cradles and modest control panel, he shook his head in wonderment. “Madness!” he said. “Madness – but amazing.”

Russia
Russia to Send First Ever Robot-Cosmonaut to ISS
Close by in the same room are examples of the explosion of commemorative objects manufactured after Yuri Gagarin became the first person in Space, on April 12, 1961 – objects which find a modern-day echo in the gift shop. Postcards, matryoshka dolls, celebratory chinaware.

And then there’s the big stuff, like the five-metre high LK-3 lunar lander (1969), designed to take one person to the Moon and kept secret until 20 years after the USA had put a man on the Moon. The huge artifact – testimony to the high pressures of the Space Race during the Cold War between the West and the Soviet Union – was declassified especially for this exhibition.

“On behalf of all humanity”

“The US’s NASA publicity machine dominated (after the Apollo Moon landing) and all the Soviet/Russian achievements from 1957-1966 were blotted out,” Cosmonauts curator Doug Millard told Sputnik News. During that time, the Soviet Union sent dogs into Space to test conditions for human flights, put the first man and woman into Space, and captured the first images of planet Earth from the windows of the Vostok 2 spacecraft.

“Sure, putting a man on the Moon was a big deal,” Millard says, “but this exhibition had to be done. It brings together the crown jewels of Russian achievement in Space.”

Russia 'Does Not Have Time for Cold Wars', Other Issues Should Be Solved
Is there a danger that today’s visitors will be influenced by lingering Cold War perceptions of the Soviet Union, or current tensions with Russia?

Millard thinks not. “Our visitors can distinguish between the hurly-burly of everyday politics and this exhibition. It tells a cultural story of the unique relationship between Russia (Imperial, Soviet and now the Russian Federation) and the Cosmos, all through the 20th century. It speaks on behalf of all humanity. It transcends politics.”

Another of the very first visitors, a business consultant called Julia, was inclined to agree: “Whatever bad press Russia – rightly – gets now, it’s good to see what they’ve achieved.”

Her companion Fiona said she was struck by the gender equality in the Soviet space world. “Looking at that capsule that Valentina (Tereshkova) flew in – it just showed that any woman with the guts and determination could do that. There’s no sense of women as second-class citizens,” she said, sounding a little surprised.

Tereshkova herself, who was in London for the launch of the exhibition, is in her seventies and still an active member of the Russian parliament.

Fiona was also struck by how “serious” the exhibition is – especially noteworthy in the Science Museum, which is renowned for the interactivity of its exhibits and its ‘press this button’ approach.

“There’s no interactivity, no gimmicky gadgets, but it’s stunning to look at, and it’s not just about machines. There’s a lot of humanity – like the mannequin with sensors they sent up to test radioactivity and so on before Gagarin’s flight.”

The Original Space Cowboys: Gagarin and His Team
But despite the lack of interactiveness, visiting children pressed around the cases displaying special suits to compress the spine and legs, which stretch during prolonged periods of weightlessness, and the ejector seats for the first dogs in Space, while adults agreed there’s plenty for the youngsters.

“Kids are always fascinated by Space,” said Julia, “and the early sputniks are very much precursors to (TV series) Dr Who – there’s that one that really looks like a Dalek!”

“Most 10-year-olds have got more technology in their pockets than there is on display here,” said Dave, an IT expert and parent in his forties. “But that’s the point. The exhibition really makes you realize how primitive the technology they were using at that time was. It’s pretty incredible how those cosmonauts ever got back… Stunning.”