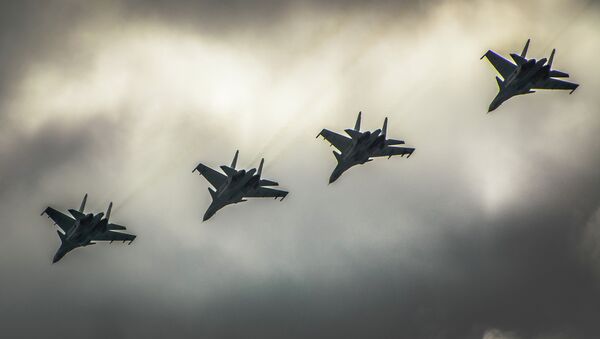 © Flickr / kuhnmi
Subscribe
Syria’s UN ambassador on Wednesday said Russia had every right to carry out airstrikes against the Islamic State militants in his country.

“Why are the Americans fighting ISIL with their fighter jets and the Russians should be forbidden from that?” Ambassador Bashar Ja’afari told reporters, “Does it make sense? It doesn’t make sense.”

US-Led Coalition Against the ISIL Launches 14 Airstrikes in Syria, Iraq
“After all, we are fighting the same enemy,” he added.

The Syrian envoy also said that Russia’s military assistance to Damascus was coming as part of the longtime defense cooperation between the two countries.

Earnest said the White House would welcome an "integrated, coordinated constructive effort from Russia" to support the US-led coalition in Syria.

Syria has been mired in civil war since 2011, with Assad’s government fighting against many opposition factions and militant groups, such as Islamic State.

Since 2014, an international coalition led by the United States has been conducting airstrikes against IS militants without approval from Damascus, as the West does not recognize Assad as the legitimate leader of Syria. The coalition has also been training the so-called moderate opposition.

The prolonged military action in Syria has contributed to a global refugee crisis, with hundreds of thousands of people flocking to Europe in a bid to secure asylum.

000000
Popular comments
Russia needs to show the world what its made of and set up that airbase to immediately start decimating those scum isis fanatics. Syrian army with russian air cover watch out washington you might be shamed
Donboston27
19 September 2015, 06:18 GMT1
000000
The United States has absolutely no business or right to be in Syria in the first place. The US has no mandate from the United Nations Security Council nor has it any permission from the legal government of Syria. The United States sole purpose and aim is regime change not to defeat terrorism. What the US will demand is that Russian military assets come under the direction of the US military command. I would hope that this scenario is unacceptable to President Putin. Russia is the ONLY military that is in Syria based on international legal principles and therefore any other military force should be considered an invasion force and enemy of the Syrian nation.
hopscotch64
20 September 2015, 05:57 GMT1
000000
Newsfeed
0
New firstOld first
loader
LIVE
Заголовок открываемого материала
Access to the chat has been blocked for violating the rules . You will be able to participate again through:∞. If you do not agree with the blocking, please use the feedback form
The discussion is closed. You can participate in the discussion within 24 hours after the publication of the article.
To participate in the discussion
log in or register
loader
Chats
Заголовок открываемого материала
Worldwide
InternationalEnglishEnglishMundoEspañolSpanish
Europe
DeutschlandDeutschGermanFranceFrançaisFrenchΕλλάδαΕλληνικάGreekItaliaItalianoItalianČeská republikaČeštinaCzechPolskaPolskiPolishСрбиjаСрпскиSerbianLatvijaLatviešuLatvianLietuvaLietuviųLithuanianMoldovaMoldoveneascăMoldavianБеларусьБеларускiBelarusian
Transcaucasia
ԱրմենիաՀայերենArmenianАҧсныАҧсышәалаAbkhazХуссар ИрыстонИронауОssetianსაქართველოქართულიGeorgianAzərbaycanАzərbaycancaAzerbaijani
Middle East
Sputnik عربيArabicArabicTürkiyeTürkçeTurkishSputnik ایرانPersianPersianSputnik افغانستانDariDari
Central Asia
ҚазақстанҚазақ тіліKazakhКыргызстанКыргызчаKyrgyzOʻzbekistonЎзбекчаUzbekТоҷикистонТоҷикӣTajik
East & Southeast Asia
Việt NamTiếng ViệtVietnamese日本日本語Japanese俄罗斯卫星通讯社中文（简体）Chinese (simplified)俄罗斯卫星通讯社中文（繁体）Chinese (traditional)
South America
BrasilPortuguêsPortuguese
NewsfeedBreaking
13:12 GMTMoscow: US Failed to Discredit Russia's Electoral System
12:59 GMTWorld Leaders Participate in First Day of 76th UN General Assembly
12:54 GMTDaniel Craig to Exit James Bond Role, Says Next 007 Shouldn't Be a Woman
12:54 GMTRussia's Foreign Ministry Slams EHRC Ruling on Litvinenko's Death for Promoting Russophobia
12:34 GMTUK Warns It Will 'Counter Russian Threat' as Authorities Charge Third Suspect in Salisbury Poisoning
12:12 GMTSudanese Prime Minister Believes Coup Attempt Reveals Need for Army Reform
11:58 GMTEU Commissioner Warns ‘Something is Broken’ in Transatlantic Ties in Wake of AUKUS Sub Snub
11:58 GMTUK is 'Heading Back to Oligopoly' in Energy Sector, Bankruptcies on the Way as Prices Surge: Expert
11:51 GMTTop Pakistani Diplomat Calls for Unfreezing Afghanistan's Foreign Assets
11:47 GMTFrance Warns That AUKUS Submarine Row May Thwart EU-Australia Trade Talks
11:19 GMTRonaldo, Messi Comparisons Go Viral as Football Superstars Make Contrasting Starts at PSG & Man Utd
10:43 GMTTucker Carlson Lambasts US Army For 'Doing P.R. for Satanism' With COVID-19 Vaccine Promotion
10:38 GMTIndian Army Chopper Crashes In Jammu and Kashmir, Both Pilots Dead
10:37 GMTTrump Warns Border Crisis Turning US Into ‘Third World Nation’
10:33 GMTBoris Johnson Confronted Amazon Founder Jeff Bezos On Concerns Over E-Commerce Giant’s UK Tax Bill
10:25 GMTSituation in Khartoum, Sudan Following Thwarted Coup Attempt
10:21 GMTKremlin Says ECHR Claims of Russia's Responsibility for Litvinenko's Death Are 'Unfounded'
10:18 GMTUK Police Authorise Charges Against Third Suspect in Salisbury Poisoning
10:17 GMTKremlin Does Not Accept Ankara's Claims About Illegitimacy of Vote in Crimea
09:01 GMTKhartoum 'Living Normal Life' as Attempted Coup Thwarted, Russian Embassy Says