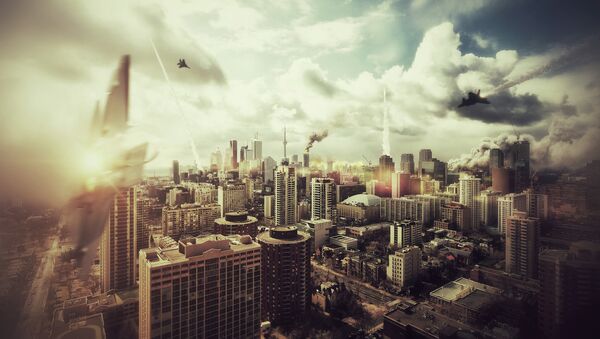 © Flickr / Sam Javanrouh
Subscribe
Tensions between the United States and China, as well as conflicts in the Middle East could spark off a devastating Third World War in less than a decade, warned political analyst Carlos Murillo.

"The arms race has reached such a scale that a new world war could erupt anywhere in the world. Many analysts believe that tensions in the South China Sea or the Middle East could become a trigger. Generally speaking, any conflict could spark a world war," Murillo told Costa Rican newspaper La Nación.

The South China Sea is mostly controlled by China but also contested by Brunei, Malaysia, Taiwan, the Philippines and Vietnam. Some of these countries are involved in land reclamation projects in the area.

China Rightful Owner of South China Sea Since Han Dynasty – Admiral
The United States has been enraged by Beijing's peaceful endeavor claiming that it will undermine stability in Asia. For its part, China flayed Washington for meddling in the affairs of other countries and building up its military presence in the Asia-Pacific.

Moreover, according to China, since the US is not a party to the overlapping territorial disputes in the South China Sea, it should not take part in settling them.

Beijing has repeatedly urged its neighbors to settle all issues through bilateral talks and insisted that it has no intention of doing anything that could impact negatively on the major artery for the world's commercial shipping.

Murillo sees this conflict as the most dangerous globally at the moment. He also believes that "should a war erupt soon, then the United States will have an advantage."

NATO Could Take a Walk Down Memory Lane and Stop Provoking Nuclear War
The political analyst also spoke about the race for the riches of the Arctic. "Europe is to a greater degree dependent on the deliveries of Russian fossil fuels. If Moscow is able to take regional resources under control, it will become the world's leading energy power, capable of determining natural gas prices," he observed.

Murillo did not mention that Russia's exploration activities in the Arctic fully complied with the 1982 UN Convention on the Law of the Sea (UNCLOS) and the country had no plans to illegally grab land in the Arctic.

In addition, Murillo commented on the European Union's enlargement, calling expansion to the East the bloc's "strategic mistake." But, according to the expert, this decision was sound in terms of economic benefits.

By adding new members "the EU received access to cheap labor force, which has since become more expansive. The United Kingdom, France and Germany did not really deal with the crisis in 2008 because they had access to cheap man power. When they lost this advantage, they decided to go for Ukraine," the analyst observed.