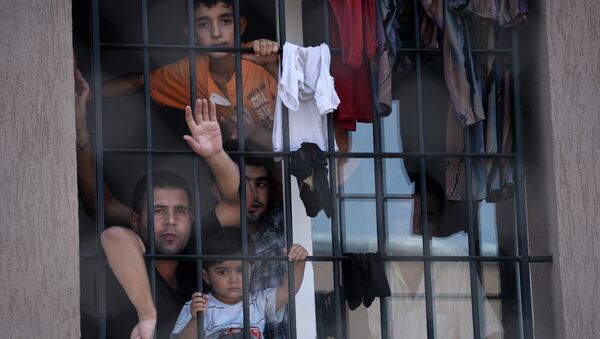 © AFP 2021 / DIMITAR DILKOFF
Subscribe
The ongoing migrant crisis is mostly rooted in the Western neo-colonial policy in the Middle East. However, now it looks like Europe would not be able to deal with the consequences of its past actions.

Migrant Crisis Largest Humanitarian Issue in EU History - Polish PM
After a photo appeared online of a three-year-old Syrian boy who washed up on the Turkish shore sparked worldwide outrage, the refugee crisis turned into one the most polarizing and widely-discussed issues on the agenda.

In the European Union, from Hungary to Germany, the crisis has been escalating since Hungarian Prime Minister Viktor Orban made a series of controversial comments on the issue. It became clear that the crisis has turned into a terrible humanitarian disaster.

Now, the issue is being considered a new instrument of a secret war, Mehmet Seyfettin Erol, an author for Turkey’s Milli Gazete, wrote in his article.

The refugee problem, which reached peaked around the time of the September 11 attacks and Arab Spring, originally stems from wars along the border of "the Greater Middle East", he wrote.

Currently, the issue is a demographic bomb which is used by rival sides against each other, the author added. This is why any efforts to consider the crisis only in terms of refugees are pointless.

First of all, one should not forget that the world has been in an unnamed and undeclared war for a long time, the author pointed out. The only things that change are the techniques and instruments utilized to achieve the goal.

However, those who instigated the war have failed to predict its consequences, and now they have thousands of refugees knocking on their door, the article read. Now, Europe and its values are threatened by those affected by the Western policy of neo-colonialism.

"Europe which previously warned about 'a barbarian invasion' and tried to build the great European fortress has again proved it is the greatest barbarian of all time," the author claimed.

The refugees which have recently flooded Europe could provoke a number of new conflicts and tensions both inside the European Union and across the world, according to the article. This is illustrated by the fact that the US blames the EU (and especially Germany) for the crisis while European countries keep blaming each other.

Recently, Orban said that the refugee crisis is Germany’s problem, not Hungary’s. This comment is extremely important because it reveals "the German split" within the EU and describes its reaction to Berlin’s policy.

What is more, Orban warned that sooner or later Muslims will make up the majority of the EU population which would likely ruin European culture. He proclaimed that Europe should close its doors to Muslim refugees.

Beginning of The End: Migrant Crisis Will Be 'Europe’s Suicide'
These words prove Europe is still a "club of Christian nations". However, the so-called European ideals and Christian values can no longer mask the true face of the EU project, the article read.

In this respect, the author criticized the EU approach to the refugee problem which severely lacks humanism.

The Western neo-colonial policy has failed, and Europe cannot protect the interests of its victims, the author concluded.