Merkel Hits Out at European Xenophobia Amid Refugee Crisis 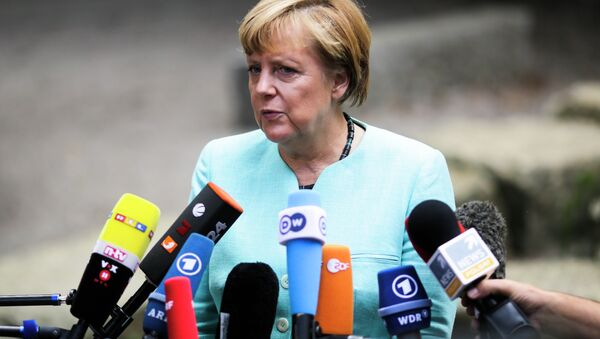 © AP Photo / Markus Schreiber
Subscribe
German Chancellor Angel Merkel has hit out at the rising tide of xenophobia as deeper splits between countries in Europe emerged over the refugee crisis which has seen some countries close their borders in defiance of EU and UN rules.

Merkel has led the way in taking in refugees fleeing war zones in and around Syria, as well as a rising tide of migrants fleeing the Balkans. Europe is completely divided over the issue with some countries — including Germany itself — putting up border controls or even — in the case of Hungary — closing its border completely, in defiance of the Schengen Agreement on free movement.

Although Germany has been the most receptive to refugees and migrants, there is a growing minority protesting at the sheer volume Germany is taking in — predicted to be one million by the end of this year. Merkel told German newspaper Tagesspiegel:

"If we now have to start apologizing for showing a friendly face in response to emergency situations, then that's not my country."

Merkel has said that "European solidarity" is the only way to face the "challenge".

Her comments mark a toughening of her stance in Europe, where she has repeatedly called for other countries to take their fair share of refugees. However, a quote system put forward by European Commission President Jean-Claude Juncker and backed by Merkel has been rejected so far because of opposition from other countries.

Fifty barbers in Germany have spent their day to give 300 refugees a new haircut in the streets of Hamburg. #humanity pic.twitter.com/PfpoTh3RAP

Merkel spent much of her early life in East Germany and is particularly proud of the benefits reunification gave Germany and the way East and West welcomed each other with open arms. Germany has a history of giving safe haven, after years of accepting those crossing the Berlin Wall or the Iron Curtain as a whole.

An emergency proposal to relocate 120,000 asylum seekers from Italy, Greece and Hungary among EU member states was backed by the European Parliament Thursday. The first temporary emergency rules for relocating an initial 40,000 over two years from Italy and Greece only were approved by Parliament on 9 September.

Parliament's backing in record time of the European Commission's 9 September proposal to relocate 120,000 asylum seekers sends a clear signal to EU home affairs ministers, who meet again on Tuesday 22 September, that it is high time to act and finally agree on this second emergency scheme.

The proposed mandatory scheme would allocate asylum seekers to member states according to their capacity to absorb them, to be calculated using the following weightings: population size 40%, GDP 40%, average number of past asylum applications 10% and unemployment rate 10% (see proposed allocation per member state).

Polish PM Ewa Kopacz has backed Merkel in saying she will take in more refugees under the EU relocation scheme, but there is fierce opposition in Hungary, Slovakia and the Czech Republic to the mandatory scheme, and the UK and Denmark are exercising their opt-out right.