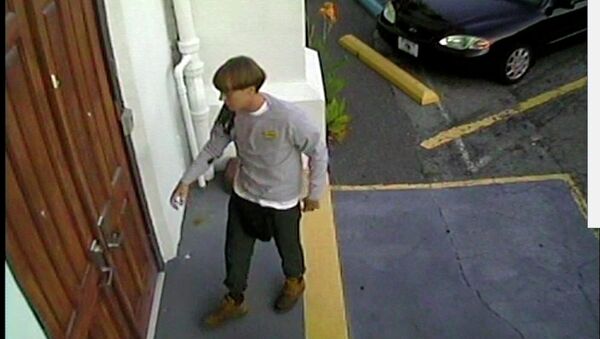 © REUTERS / Charleston Police Department
Subscribe
The man who housed Dylann Roof prior to the June 17 massacre at Emanuel AME Church in Charleston was arrested by the FBI just before 4 p.m. on Thursday.

Joseph “Joey” Meek Jr., 21, had allowed Roof to stay at his trailer in Red Bank, South Carolina, which he shared with his mother, two brothers, and his girlfriend.

While it was Meek who initially called the police after seeing his friend’s photo on the news, the letter he received from the US Attorney’s Office in Columbia stated that he was being investigated for possible misprision and allegedly making false statements to law enforcement, both of which are felonies.

The State noted that the maximum sentence for making false statements rises an additional three years up to eight for certain types of crimes, such as domestic terrorism.

Roof had previously made comments about wanting to start a race war in America, but Meek maintains that he did not take him seriously.

“There are a lot of people talking violent things, like rappers, and no one takes them seriously,” Meek told The State.

He has stated that Roof would only make such statements when he was drunk, and that he had black friends who he did not mistreat, leading him to believe it was just talk.

“Would you believe your friend if they said something like that when they were drunk?” Meek previously asked the Washington Post. “You can’t tell me you would. I didn’t believe it. I brushed it off.”

Roof is facing both state and federal murder charges for the shooting, but was not charged with domestic terrorism.

On Wednesday, Roof’s attorney announced that he is willing to plead guilty to the state’s murder charges in exchange for life in prison without parole, as long as he is spared from the death penalty.