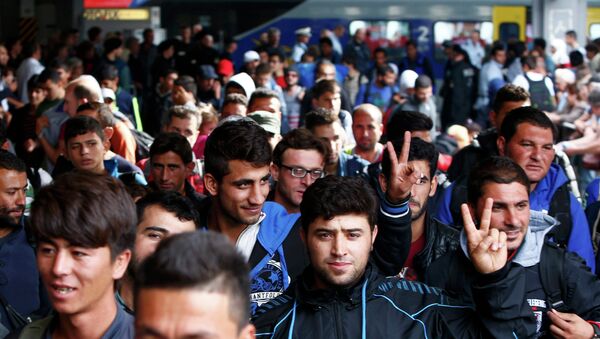 Nuclearization of EU: Europeans Feel Increasingly Betrayed by Washington
While the European refugee crisis is spinning out of control the question arises whether Washington was aware that its policies in the Middle East would boomerang to Europe.

Was it not clear since the very beginning that the US' Middle Eastern crusade would prompt desperate and destitute refugees to seek shelter in Europe, analysts ask.

Some of them refer to gloomy predictions made by Iraqi president Saddam Hussein and Libyan leader Muammar Gaddafi who warned that the US military operations in the Middle East and North Africa would "open the gates of Hell" and inevitably result in millions of illegal immigrants flooding into Europe.

"I honestly do not see how strategists in Washington, or anywhere else for that matter, could fail to understand what happens historically, when widespread upheaval, such as the Arab Spring insurgencies occur. Either the Obama administration was negligent, or we have to assume there is a degree of strategy playing out before our eyes," Germany-based American political analyst Phil Butler told Sputnik.

Incredible as it may seem, the European refugee crisis is playing straight into the US' hands: Europe weakened by the economic downturn and the ongoing refugee crisis is losing much of its former splendor in the eyes of transnational financiers. At the same time, the United States remains the only "safe haven" for global capitals.

On the other hand, experts note that Washington is interested in vast destabilization of the region stretching from Western Europe to China's periphery in the East, especially in the light of the China-led New Silk Road Economic Belt initiative that threatens to deal a blow to the US' established positions in Eurasia.

"Yes, this is exactly the situation. I would add, the US is in really big trouble from a leadership and world economic standpoint. Add to this statement that Russia is the biggest emerging competitor, and you will have isolated the cause of Washington's vigor and vigilance in running these games. A simple way of putting this is, Russia is on the rise, and the United States on the decline. The goal of the original Cold War was to prevent or slow this inevitability. The dollar is based on air, the ruble on gold, diamonds, natural resources, and potential. This is the long and short of today's conflicts. Obama has to elongate this containment, any way possible," Phil Butler underscored.

Meanwhile, loud voices emerge in Europe urging the US leadership to stop criticizing Russia over Ukraine and Syria and team up with the Kremlin in order to settle the Syrian conflict.

"Global and European challenges can only be solved by working together with Russia and certainly not against our major partner in Europe," former German foreign minister Hans-Dietrich Genscher said at a conference dedicated to the 70th anniversary of the 1945 Potsdam Agreement.

Does it mean the US and the EU may soon reconsider their anti-Russian stance?

Syrian Crisis: West's 'Grand Plan' Dragging Middle East Into Bloodbath
Butler is not so optimistic about it:

"I don't think anything short of a major upwelling of protest in the US will affect a change in this administration's position on Russia," the analyst remarked.

"As for the EU, I see the shift away from Washington, though not necessarily toward Moscow just yet. The refugee situation, for the moment, is only heating up the détente frying pan," he added.

Still, there is no light at the end of the tunnel and the future of hundreds of thousands of refugees is hanging in the balance.

"This asylum seeker/refugee situation is the final straw in a human tragedy of monumental proportions. Since before 9/11, the great force of so-called "globalization" has affected everyone on the planet, and not all that positively as we see today. The United States and some allies have expended humongous resources to no effect except to create more tension, more war, and more suffering. I think most people will admit this now," Phil Butler elaborated.

Global Problems Can Only Be Solved With Russia’s Help – Former German FM
To complicate matters further, Europeans do not seem to be "very happy" with the sharp influx of the culturally and ethnically alien refugees. The suspicion that thousands of former ISIL fighters are entering the EU as asylum seekers is only adding fuel to the fire. At the same time experts expect the rise of far-right movements in Europe as a response to the migrant crisis.

Oswald Spengler's "Decline of the West," which tells the story of the potential decay of European civilization, comes to mind. "Every thing-become is mortal. Not only peoples, languages, races and Culture are transient," Spengler noted.

"Spengler is absolutely correct. Europe is, in effect, all done if the trend continues," Butler stressed.

"Here in Germany, people barely even work anymore. They live on the rationale, the government milk bottle so to speak. Fragmentation has always been the EU's problem, and tens of thousands more unfortunates to feed, this is not going to help. What's even worse, the fear most Europeans have of foreigners, is only now being fanned into a blistering flame. It will not take much for a new kind of holocaust to grip Europe, and the world. This sounds extreme, I know, but North Africa in flames was a sci-fi film just a few years ago. Europe is in very big trouble, and no politician I see has on his or her thinking cap. It's as if this is all scripted — or shear madness," the American political analyst concluded.