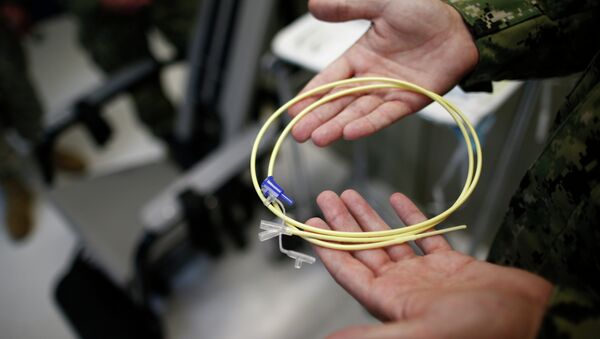 Video depicting the force feeding of a prisoner at the US detention center at Guantanamo Bay, Cuba, demonstrates only one technique in a "chamber of horrors", a lawyer for Guantanamo detainees told Sputnik.

Retired CIA Directors Stand Behind US Torture Program in New Book
WASHINGTON (Sputnik) — Video depicting the force feeding of a prisoner at the US detention center at Guantanamo Bay, Cuba showcases just one of a litany of torture techniques in the Central Intelligence Agency’s (CIA) repertoire, a lawyer for Guantanamo detainees told Sputnik.

"Look at all the enhanced interrogation techniques… look at what they did in the CIA prisons," David Remes told Sputnik on Wednesday. "This [force feeding] is only one technique in a chamber of horrors."

It took about eight years, Remes explained, for the Justice Department to hand over the tapes to the judge, which have probably been heavily redacted by the CIA because the agency does its utmost to prevent misdeeds from being brought to public light.

‘Zero Dark Thirty’ Creators Seduced CIA With Booze and Cheap Earrings
The Justice Department always claims evidence like this should not be made public because it could threaten US national security, Remes argued, but whether the position is justified in this case remains to be seen.

One nurse, however, refused to engage in force feeding prisoners, which drew a considerable amount of media attention within the past year, he added.

"And this is just one who went public with it," Remes underlined. "Who knows how many others there were? It was a very brave thing to do."

US Government Blocks Release of CIA Torture Details
In June, UN Special Rapporteur on Torture Juan Mendez said it was unacceptable to force-feed individuals "who have opted for the extreme recourse of a hunger strike to protest against their detention without charge and conditions of detention and treatment."

The International Committee of the Red Cross (ICRC) is opposed to forced feeding, claiming it is essential that prisoners’ choices be respected and their human dignity preserved.

In 2014, the US Senate released the so-called CIA torture report which revealed that the agency lied to the government about its torture practices, including subjecting detainees to low temperatures, simulated drowning, sexual humiliation, forced rectal feeding and sleep deprivation.