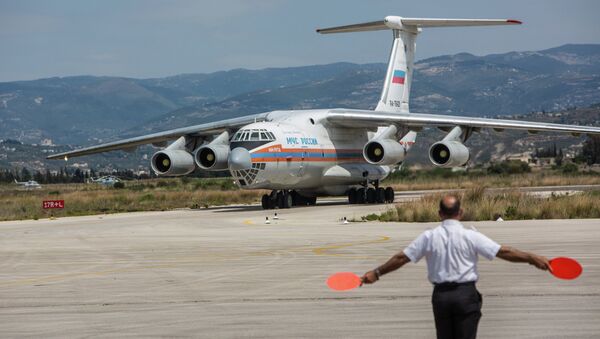 © Sputnik / Andrei Stenin
/
Go to the mediabank
Subscribe
International
India
Africa
Russia's assistance to Syria could well help Moscow play a more prominent role across the Middle East as Washington's allies in the region feel increasingly disappointed with the US.

World
America's New Nightmare: How to Cope With Russia on the Ground in Syria
Western politicians, experts and media almost exclusively refer to Russian aid to Syria as "military buildup" if not "military intervention" which it is not. In reality Moscow is helping Damascus in its fight against Islamic militants, including the Islamic State (IS) and al-Qaeda's offshoot in the country.

To that end, President Vladimir Putin has urged to form a new coalition, involving Syria, Turkey, Jordan and Saudi Arabia, to prevent Islamic extremists from overrunning the country since the US has been struggling to deliver on its promise to degrade and ultimately destroy the IS.

One of the implications of Russia's assistance to Syria conducted in accordance with international law is likely to be the country's growing clout in the Middle East at a time when US allies in the region are growing increasingly disillusioned with Washington's commitment to addressing their needs and concerns.

In reality, there is little, if anything, America can do to bunt Russia's geo-political influence in Iran or Syria. That's a fact.

Russia appears to be "greatly enhancing its ability to project power in Syria and neighboring states," Eric Schmitt and Michael R. Gordon noted in an article titled "Russian Moves in Syria Widen Role in Mideast."

"This is the most important Russian power projection in the region in decades," the two journalists quoted Stephen J. Blank of the American Foreign Policy Council as saying. "It will enhance Russia's influence throughout the Levant," the expert on the Russian military noted.

Meanwhile, Moscow is continuing its support to its key ally in the Middle East. Earlier this week, Putin said Russia will continue to provide the necessary military, technical and humanitarian assistance to Syria to fight Islamic State militants and urged other countries to join the efforts.