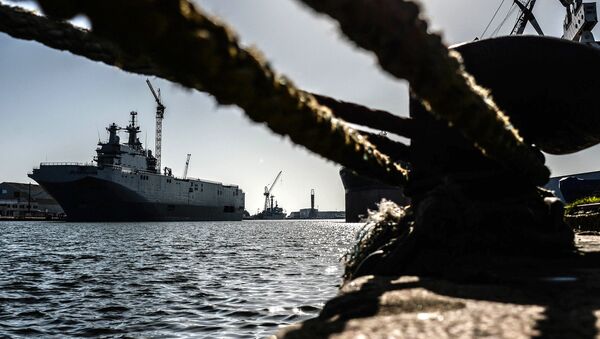 © Sputnik / Alexey Filippov
/
Go to the photo bank
Subscribe
The decision by the French government to cancel the delivery of two Mistral-class helicopter carriers to Russia would seriously damage France’s reputation, Aymeric Chauprade, a member of the European Parliament and a geopolitical analyst, said.

Talks With Buyers of Mistral Warships Held in 'Good Conditions'
"The decision by French President Francois Hollande to terminate the contract with Russia which was previously signed by the two governments is a regrettable decision. What is more, this is a very dangerous decision for our national interests because it doubts the reliability of France as an international partner," Chauprade said in an interview with Rossiya 24.

According to the politician, representatives in the defense industry pay great attention to governments’ reliability in the field of military contracts.

"When France terminated the deal, that was a warning sign for other partners," he added.

"I strictly condemn any decisions which would seriously damage France’s reputation," Chauprade said.

On Tuesday, French Foreign Minister Laurent Fabius said that talks with the potential buyers of the two Mistral-class ships initially built for Russia have been positive. The minister made the announcement during a session of the French parliamentary commission for foreign affairs which was reviewing a bill to terminate the contract with Russia.

Earlier, he said that a number of countries have expressed interest in buying the vessels, including Canada, India, Singapore and Egypt.

Fabius also underscored that France and Russia have settled all the points to terminate the deal.

Russia and France inked a €1.2 billion agreement to deliver two Mistral-class amphibious ships in 2011. The contract was signed by the Russian company Rosoboronexport and French naval defense company DCNS/STX.

France Pays Russia €950 Million for Cancelled Mistral Deal
France was due to deliver the first Mistral – the Vladivostok – to Russia in November 2014. However, the delivery was delayed due to the conflict in eastern Ukraine and anti-Russian sanctions imposed by the West.

On August 26, France announced that the sum of the compensation will be made public after the bill officially terminating the deal is submitted to the parliament.