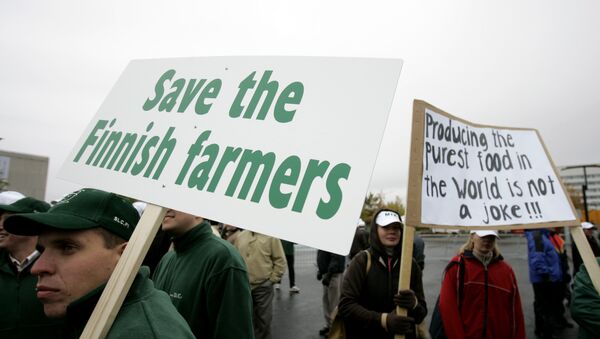 Finland’s farming industry has already lost €400 million due to a food embargo imposed by Russia last year in response to Western anti-Russian sanctions, according to a report by MTK, the Central Union of Finnish Agricultural Producers.

According to Eurostat data, Finland was ranked fourth among European countries affected by the embargo and its dairy industry was ranked second.

Recently, the European Union agreed to unveil €9 million to Finnish farmers as compensation. However, MTR insisted that the sum was not enough.

According to the Union, the European Commission does not realize the impact the Russian embargo has had on the Finnish farming industry.

Estonian Farmers to Rally Over Russia's Food Embargo
Instead, Finnish farmers demand that the EU distribute financial aid according to the losses and the market situation, taking into account all the industries and production sectors. The EU aid package is €420 million, and most of the money will be spent to support the dairy industry of the largest European agricultural producers.

"It looks like the EU provides financial aid to the largest producers mostly taking into account their production capacities but not the problems created by the embargo," Antti Sahi, chief of MTK, said.

"We are very disappointed with the decision according to which the EU is not responsible for the consequences of its own policy," he added.

What is more, the €400-million loss covers only direct damages from the decline in export volumes. It does not include the losses of financial organizations working with the industry as well as losses in taxes, and the rise in unemployment.

Over 5,000 Farmers Rally in Brussels Demanding EU Help Amid Low Food Prices
Moreover, after Russia imposed its food ban the Finnish market was oversupplied with potato, dairy and meat products which dropped prices by 5-12 percent.

On September 7, dozens of Finnish farmers participated in major protests in Brussels over the EU policy in the agricultural market.