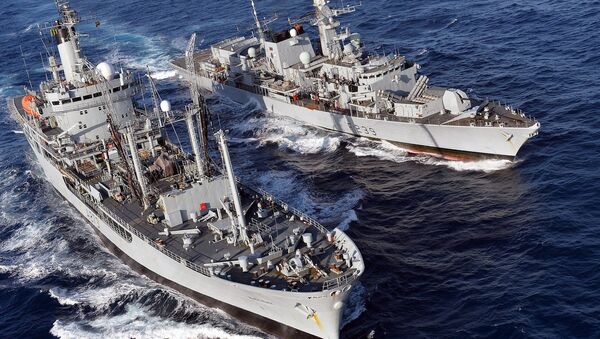 © Flickr / Defence Images
Subscribe
A British warship armed with a surveillance drone and a helicopter is on route to the Mediterranean to pursue people smugglers – but it remains unclear what it will be able to achieve.

HMS Richmond with 200 sailors and Royal Marines on board will help in the second phase of the European Union's military plan to prevent more migrants and refugees from drowning in international waters off the coast of Italy and between North Africa.

Countries involved in the EU naval force are meeting in Brussels to discuss what each nation will contribute to the second phase of the mission. This includes intercepting, boarding and seizing vessels used by people smugglers to traffic humans from North Africa to Europe — but only on international waters.

Ninety percent of the unseaworthy vessels carrying refugees and migrants set sail from Libya. But without consent from the Libyan government — or a UN Security Council resolution — EU ships will not be able to target the vessels off the Libyan coastline.

"There is no military solution to migrants crossing the Mediterranean."

But what's missing from many of the reports in the British press on the deployment of the UK Navy warship to combat people smugglers at sea, is the threat posed by Islamic State militants.

The military action was approved by EU member states in May and leaked military plans revealed an acknowledgement that the EU naval force could face terrorist groups such as ISIL, "within the Libyan sovereign area."

"The threat to the force should be acknowledged, especially during activities such as boarding and when operating on land or in proximity to an unsecured coastline or during interaction with non-seaworthy vessels. The potential presence of hostile forces, extremists, or terrorists such as Da'esh [ISIL] should also be taken into consideration."

Ramping up military action is being seen as being a public relations response to the crisis, the leaked EU documents say:

"The information strategy should avoid suggesting that the focus is to rescue migrants at sea but emphasize that the aim of the operation is to disrupt the migrant-smuggling business model."

Peter Roberts, senior research fellow for sea and power and maritime studies at the Royal United Services Institute told Sputnik that: "It's rather a confusing state of affairs," as he suggested that it could be more of a public relations exercise than a military one.

"They have the ability to intervene on the high seas and take action where they meet standard conventions. They don't have extra permission to go into Libyan waters. It's really not clear what this new force is going to do."

"The four ships they have assigned from Britain, Italy and Germany are supposed to go out and deconstruct the business model of criminal groups. This is something the naval forces are skilled in, they can sink boats or shoot them up or divert them — but for military officers to try and understand the intricacies producing a legal case against these people for a crime that has differing interpretations in different nations, [and] it's just not clear.

ScanEagle, the type of Royal Navy drone that'll be used by HMS Richmond to look for people smuggling off Libya pic.twitter.com/wzoju4eIrS

Indeed, Britain's Defense Secretary said the crisis must be tackled "at source".

"The vital work of HMS Bulwark, HMS Enterprise and our Merlin helicopters shows the UK's commitment to tackling the refugee crisis at source."

"It's important the mission moves to the next phase," said Fallon.

"We will not stand by and let this smuggling trade escalate; we will confront this criminal activity which risks the lives of innocent people every day."

But without a UN Security Council resolution it remains unclear what exactly the warships will be able to achieve and whether they can fulfil the third phase of the mission to tackle people smuggling boats on Libyan waters — where 90 percent of boats carry desperate migrants and refugees making their way to Europe.