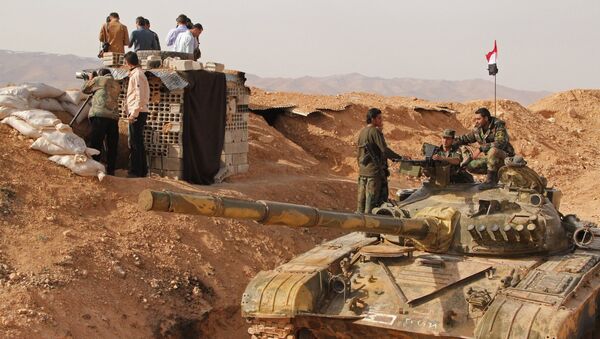 Russia Sends Firearms, Grenade Launchers to Syrian Army to Counter ISIL
ULAN BATOR (Sputnik) — Without the Syrian army, the Islamic State would have already reached the southern European coast, the head of the Russian delegation to the Organization for Security and Co-operation in Europe Parliamentary Assembly (OSCE PA) said Wednesday.

ISIL is an extremist group, notorious for its many human rights atrocities. It has occupied large areas in Syria and Iraq declaring a caliphate on seized territory. The disorganized religious fundamentalist group has made some effort to establish administrative and civil control.

"I would rather say, if there were no Syrian [government] forces, the caliphate would feel comfortable in the Mediterranean, and would have even advanced further," Sergei Naryshkin said at the OSCE PA in the Mongolian capital of Ulan Bator.

Alongside combating ISIL in the country, the Syrian army is battling a so-called moderate opposition, as well as other insurgent groups, including the Nusra Front, an al-Qaeda affiliate.

Russian Official Lays Blame for Europe Migrant Crisis on US Policy
The Iraqi army, as well as Kurdish troops, play a major role in the fight against ISIL, Naryshkin stressed.

According to the delegation head, Russia will continue to supply Syria with weapons to assist in countering terrorism, in accordance with international law.

Naryshkin underscored that Russia does not conceal that it has delivered military aid to Syria to help eliminate terrorism in the country.