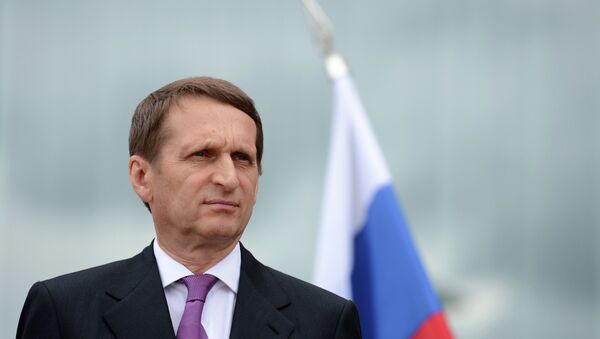 ULAANBAATAR (Sputnik) — Russian State Duma speaker Sergei Naryshkin discussed the steps which the Organization for Security and Co-operation in Europe Parliamentary Assembly (OSCE PA) could take to resolve the crisis in Ukraine, with Assembly head Ilkka Kanerva on Wednesday.

US Trying to Destroy Russian-Ukrainian Brotherhood Via Puppets in Kiev
Naryshkin met Kanerva for bilateral talks prior to the opening of the three-day long OSCE PA session in Ulaanbaatar, Mongolia.

Naryshkin added the steps which OSCE PA may take to promote the settlement of the socio-political crisis in Ukraine and "the restoration of peace in that fraternal country for us" were touched upon at the meeting.

Russian Duma speaker has also noted that Russia intends to participate in the forthcoming Organization for Security and Co-operation in Europe Parliamentary Assembly (OSCE PA) sessions in Vienna and Tbilisi, head of the Russian delegation Sergei Naryshkin said Wednesday.

"I have confirmed the intention of the Russian delegation to actively participate in the forthcoming sessions of the Parliamentary Assembly, which will be held first in Vienna, and then in the summer in Tbilisi," Naryshkin told reporters after a meeting with OSCE PA President Ilkka Kanerva.

Nearly 200 parliamentarians from 57 countries gathered in the Mongolian capital on September 16-18 for the OSCE Parliamentary Assembly’s 2015 Autumn Meeting.