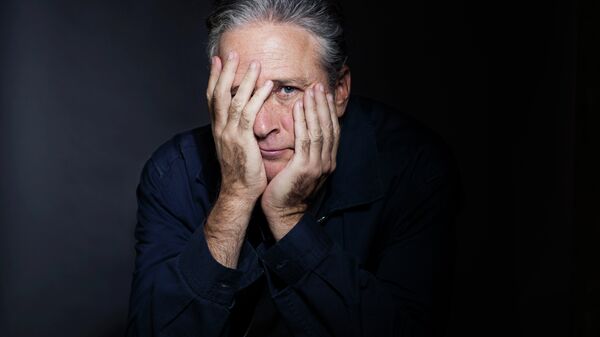 On Wednesday, political comedian Jon Stewart roamed the halls of Congress with around a hundred 9/11 first responders to lobby for a permanent extension of the James Zadroga 9/11 Health and Compensation Act, which will expire at the end of this month unless action is taken.

Over 150,000 People Want Jon Stewart to Moderate Presidential Debate
The $1.6 billion Zadroga bill has been largely ignored by Republicans, despite their outpours of concern over 9/11, the victims, and the first responders.

If the bill is not renewed, it will interrupt care to more than 33,000 seriously ill 9/11 responders around the country. Many of those who heroically searched for survivors and removed victims from the rubble and ash of New York’s World Trade Center following the 2001 attacks have developed slow-moving cancers and lung ailments.

The bill, named after the NYPD detective who died after exposure to the toxic site, passed in 2010, more than nine years after the attacks, when Congress was finally pressured into addressing the issues faced by first responders who rushed in when needed.

Bernie Sanders, the independent Vermont senator currently campaigning for the Democratic presidential nomination, is the only White House contender in the Senate to back the bill, despite bold declarations from others insisting they’ll “never forget” as the anniversary passed on Friday.

“Honored Jon Stewart will join 9/11 heroes next week, but fact is, they shouldn’t have to walk the halls of Congress at all,” Senator Kirsten Gillibrand (D-NY) tweeted on Tuesday. “It’s our moral obligation to ensure they get care.”

Stewart, along with the first responders, moved through the Capitol speaking to representatives about the importance of the bill and why it simply cannot be ignored.

9/11 First Responder Says Thoughts, Emotions to Stay Forever
Also set to expire is the $2.75 billion Victims Compensation Fund, with a deadline of October 3, 2016. If not renewed, anyone diagnosed with 9/11-linked cancers or illnesses after that date will not be eligible for financial assistance.

“Jon Stewart was one of the driving forces behind getting the Zadroga Act passed in the first place, but the law is set to expire unless Congress acts again,” Representative Carolyn Maloney (D-NY) wrote in a statement. “The ailing 9/11 responders and survivors are suffering a range of health care problems. We can’t force them to come back to Capitol Hill every five years to beg for their health care. Nobody understands that better than Jon Stewart, and nobody is better suited to make sure Congress gets the message.”

It remains unclear whether Stewart’s visit will help to push Republican representatives into putting their money where their mouth is and giving the heroes of 9/11 the respect and care that they need and deserve.