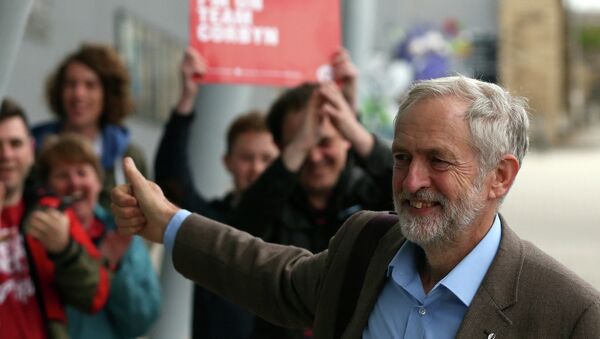 Election of Jeremy Corbyn as the new UK Labour party's leader represents a major shift in the party’s policy over the last 30 years and may cause a greater disturbance for the establishment than it can seem at first sight, analysts told Sputnik on Tuesday.

MOSCOW (Sputnik), Anastasia Levchenko — Far-leftist Jeremy Corbyn was elected as the new Labour leader on Saturday with over 59 percent of votes. He has already been dubbed threat of the UK national and economic security by the country’s Prime Minister David Cameron.

End of the Labour

"The election of Corbyn is truly the end of the concept of New Labour," Craig McAngus, a research fellow at the Scottish University of Stirling, told Sputnik.

Labour's Corbyn Brands UK Conservatives 'Poverty Deniers'
New Labour is the ideology that the party adopted in mid-1990s and was mainly manifest under Tony Blair and Gordon Brown. It marked the Labour shift to the center, closer to the Conservatives, in an attempt to widen electoral appeal.

Now Corbyn drags the party back to the left and introduce a more open and transparent concept of leadership, McAngus said. He also opens up the party to more democratic structures and adheres to "fair genuine" principles himself.

Speaking about the reasons of such a drastic change in Labour party's preferences, McAngus cited the cyclic nature of all political changes and the strong desire of the party members' for "something different."

Nevertheless, a substantial part of the party, mainly the Labour members of parliament, does not share Corbyn's far-left views and remains the most conservative wing of the party.

"Next few months will be really interesting to see how much Corbyn is able to force on particular issues, and on which issues he has to give some ground to his colleagues in the parliamentary Labour party," McAngus said.

Corbyn has been widely referred to as one of the most "rebellious" members of UK parliament, as he had opposed Britain's participation in the Iraq war, and spoke against the renewal of the British Trident nuclear deterrent infrastructure.

Conservatives Can be Shaken

Since his very appearance on the UK political stage, Corbyn has been under continuous attacks from David Cameron. Prime Minister even called the new opposition leader a threat to the national and Britons' family security on his Twitter account.

"The establishment are shocked by the degree of the Corbyn victory and so are in counter-challenge mode… I think Cameron is sensing that Corbyn’s weak points that could stir public concerns the most are some of his foreign policy positions," Mark Shephard, senior lecturer in politics at the University of Strathclyde, told Sputnik.

Britain’s Labour Party Split After Bombshell Corbyn Victory
Corbyn and Cameron have polar views on such basic aspects of the UK foreign policy as NATO and UN Security Council membership, the UK possession of nuclear weapons, relations with Russia, the necessity of military action against the Islamic State military group in Syria, migrant crisis, Britain’s EU membership and others.

"Corbyn is so different that Cameron cannot play the same game with him as, for example, he could with Blair or Brown… At the same time, acting against him may backfire the Conservatives," McAngus said.

However, the Labour party itself is going to go through tough times with the new leader. Given the centrist views of the majority of Labour MPs, a party split becomes increasingly possible.

McAngus believes that Corbyn's priority would be to preserve the party's integrity; therefore he would seek compromise on some of the contentious issues.

"Corbyn will probably be persuaded to back a yes vote [at the EU membership referendum – yes vote means that Britain should stay EU member]," McAngus said.

"The Labour party is still very much a pro-EU party, and I cannot see that changing. I think Corbyn will probably not want to risk a split. If for some reason the Labour party is split on the issue and it ended up with voting to leave the EU, it would probably mean the end of his leadership," McAngus said.

Jeremy Corbyn Becomes New Labour Leader
As for the domestic policy, economy remains number one priority for Corbyn, and newly appointed Shadow Chancellor of Exchequer John McDonnell, his closest ally, would help him in its implementation, according to the expert.

The Conservative party fears that Corbyn would breach a consensus between the two major British parties on major issues, such as nuclear weapons, taxation and others.

Therefore, changes in the Labour leadership seem to create challenges for the both main parties.

The UK Labour leadership vote was initiated after the resignation of its former leader Ed Miliband, after his party dismal result in the May general election.