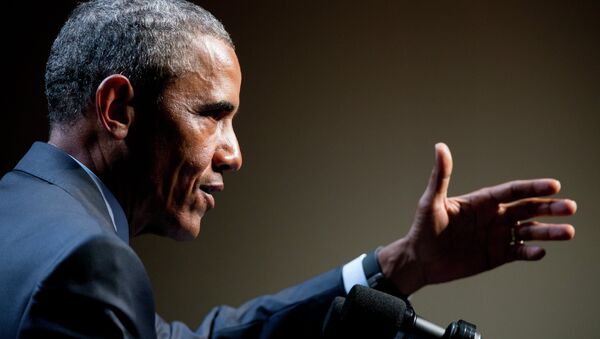 © AP Photo / Andrew Harnik
Subscribe
International
India
Africa
The resolution of the refugee crisis in Europe and the Syrian crisis require cooperation between all the European countries and the US, president Obama claimed on Tuesday.

WASHINGTON (Sputnik) — The United States and all European Union (EU) member states should cooperate to address the worsening refugee crisis in Europe, President Barack Obama stated on Tuesday following a meeting with Spanish King Felipe VI at the White House.

"We agree that this is going to require cooperation with all the European countries and the United States and the international community in order to ensure that people are safe; that they are treated with shared humanity; and that we ultimately have to deal with the source of the problem, which is the ongoing crisis in Syria," Obama said on Tuesday afternoon.

Obama also noted that he discussed with the Spanish King ways to strengthen the needed cooperation.

Also on Monday, EU member states’ interior ministers adopted a plan to relocate some 40,000 refugees that are now in Italy and Greece throughout the 28-member bloc on an equitable basis. The decision comes as some EU countries such as Hungary and Greece have expressed reluctance to welcome migrants.

President Barack Obama has directed his administration to allow up to 10,000 Syrian refugees into the United States in fiscal year 2016, the White House announced last week.

About half a million migrants and asylum seekers, mostly from the Middle East, have entered Europe in 2015, according to European Commission estimates.