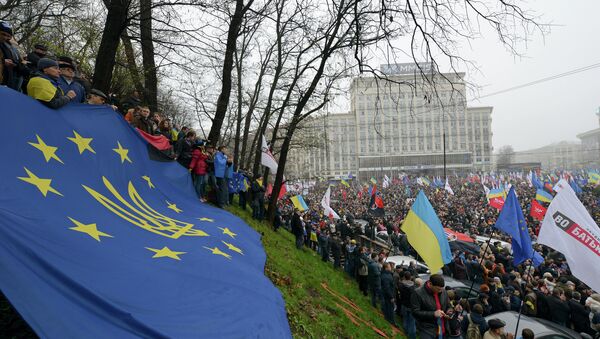 © Flickr / Ivan Bandura
Subscribe
An initiative launched by a Dutch activist group and online blog rallying Dutch citizens to support a referendum on the EU's association agreement with Ukraine is gaining force; the local public poll results show that 73% of the Dutch think that it will eventually result in Ukraine's accession into the Union…and don't want this to happen.

Geenstijl (No Style), an activist blog, has called on Dutch citizens to sign an appeal for a referendum on the EU's association agreement with Ukraine.

The activists are benefitting from a new democratic tool in the Netherlands which allows citizens to call for a popular referendum on a recently adopted law or treaty.

Dutch Activists Call for Referendum on EU-Ukraine Association Agreement
They have already gathered 150,000 out of the 300,000 needed to be able to submit it to the Electoral Council by September 28.

The reason why they want to vote on Ukraine is the criticism of how the EU handled Russia's conflict with Ukraine and of the EU-Ukraine treaty, which they regard as “provocative and a threat to the welfare and well-being of us and the Ukrainians”.

The group says that if the union opens borders with the country, which is currently at war, it will mean “open borders with a war zone”.

Additionally, the agreement was one of the main reasons for the dispute with Russia and the civil war that broke out in the east of Ukraine.

“The fact that [President] Putin’s attitude towards us is adverse, does not mean that Kiev has become a friend to us,” the local media quotes the activists as saying.

“We are sending money to Ukraine, but the government seems to have no control over the situation. In such an atmosphere any reforms are doomed to fail, and without the reforms there is no sense in the association agreement.”

However even if the campaign succeeds and a majority votes No in a referendum, the result will be non-binding for the country’s authorities who could still keep it in force.

000000
Popular comments
Easy access for UPA- OUN nazis to move themselves and contraband into the Low Country. Sounds familiar for some reason...
Zhukov
14 September 2015, 18:34 GMT
000000
New Dutch law was adopted in 2015 allowed a citizen initiative for requesting a non-binding referendum. However this request would be the very first law subject to such referendum. Clearly a referendum on the EU-Ukraine Association Agreement wouldn't stand a chance in a general referendum. The Dutch public doesn't trust the EU. The Dutch public rejected the EU constitution in 2005 and since then the EU image has deteriorated further. That would put the very much US servile Dutch goverment is the very interesting position of having to ignore the very first non-binding referendum ever held in the Netherlands. This Dutch goverment is not very popular already having no majority in the Senate and no chance at all om maintaining its current majority in the second chamber of parliament under new elections.
JPH
14 September 2015, 18:52 GMT
000000
Newsfeed
0
New firstOld first
loader
LIVE
Заголовок открываемого материала
Access to the chat has been blocked for violating the rules . You will be able to participate again through:∞. If you do not agree with the blocking, please use the feedback form
The discussion is closed. You can participate in the discussion within 24 hours after the publication of the article.
To participate in the discussion
log in or register
loader
Chats
Заголовок открываемого материала
Worldwide
InternationalEnglishEnglishMundoEspañolSpanish
Europe
DeutschlandDeutschGermanFranceFrançaisFrenchΕλλάδαΕλληνικάGreekItaliaItalianoItalianČeská republikaČeštinaCzechPolskaPolskiPolishСрбиjаСрпскиSerbianLatvijaLatviešuLatvianLietuvaLietuviųLithuanianMoldovaMoldoveneascăMoldavianБеларусьБеларускiBelarusian
Transcaucasia
ԱրմենիաՀայերենArmenianАҧсныАҧсышәалаAbkhazХуссар ИрыстонИронауОssetianსაქართველოქართულიGeorgianAzərbaycanАzərbaycancaAzerbaijani
Middle East
Sputnik عربيArabicArabicTürkiyeTürkçeTurkishSputnik ایرانPersianPersianSputnik افغانستانDariDari
Central Asia
ҚазақстанҚазақ тіліKazakhКыргызстанКыргызчаKyrgyzOʻzbekistonЎзбекчаUzbekТоҷикистонТоҷикӣTajik
East & Southeast Asia
Việt NamTiếng ViệtVietnamese日本日本語Japanese俄罗斯卫星通讯社中文（简体）Chinese (simplified)俄罗斯卫星通讯社中文（繁体）Chinese (traditional)
South America
BrasilPortuguêsPortuguese
NewsfeedBreaking
14:15 GMTRonaldo Will Cause as Many Problems as He Solves for Solskjaer, Ex-Liverpool Player Carragher Says
14:03 GMTXi Urges SCO to 'Resist' External Meddling After US, Australia Vow to Bolster Ties With Taiwan
14:02 GMTUN Security Council Holds Meeting on Afghanistan
13:39 GMTHitting US Debt Ceiling Could Trigger Recession, White House Says
13:32 GMTUnited Airlines Briefly Grounded Flights in US, Canada Due to Computer Issues, FAA Says
13:29 GMTDutch Acting Defense Minister Resigns Over Kabul Evacuations Chaos, Reports Suggest
13:27 GMTFrance Says It Cannot Trust Australia in Trade Talks After Canberra Ditched Joint Sub Deal
13:20 GMTPiers Morgan Says His New Job Will Be 'Stuff of Nightmares' for Meghan Markle
13:18 GMTIndonesia Wary of Australia's Plans to Acquire Nuclear Submarines
13:14 GMTUS Slaps New Hezbollah-Related Sanctions on Several Individuals
12:57 GMTPakistan Will Get ‘Badly Burnt’ If It Courts the Taliban Beyond a Point, Warns Author
12:51 GMTUS General Mark Milley Reportedly Downplayed George Floyd Protests' Severity in Talks With Trump
12:51 GMTIs Narendra Modi Emerging as the Most Sports Loving Indian Prime Minister?
12:28 GMTFAA Bans Drone Flights Over Texas Bridge After Thousands of Haitians Filmed Flocking to Area
12:27 GMT'Show Got It Wrong': Priyanka Chopra Apologises After Taking Flak Over 'The Activist' Format
12:05 GMTNicki Minaj Tweet That COVID-19 Vaccines Cause Impotence Sparks Protest Outside CDC HQs - Video
12:01 GMTPelosi Asked After Capitol Riot If WH Staff Did Anything But 'Kiss' Trump's 'Fat Butt', Book Claims
11:48 GMTArmenian Police to Block Streets Near Central Square Due to Planned Rallies
11:32 GMTUK Military 'Actively Recruiting' New Spies for Deployment in Asian Region Amid AUKUS-Caused Waves
11:14 GMTPunjabi Activists Clash With Police in Delhi During Anti-Farm Law Protests - Video