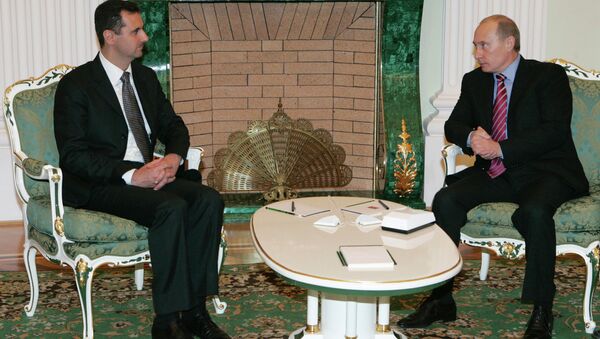 © Sputnik / Mikhail Klementiev
/
Go to the photo bank
Subscribe
A former CIA officer, while explaining Russian support to the Syrian President, points out that Putin understands the threat and the ways to fight the ISIL whereas the US has been "fool" supporting ineffective policy that leaded to the terrorist group' strength.

"I personally am glad that Russia is taking these steps," Johnson said on Monday when asked about a private sector intelligence firm claiming it has satellite imagery showing Russia is ramping up military operations in Syria. "At least [Russian President Vladimir] Putin understands the threat and understands what is needed to confront it and defeat it."

The United States has persistently called for Assad to step down, arguing that regime change is the only viable political solution, while Russia has assisted the Syrian government in its fight against the ISIL.

"The West, and the United States in particular, have been complete fools in backing a policy that has strengthened and enabled Islamic extremists," Johnson claimed.

On Friday, Russian Foreign Minister Lavrov said Russia would continue the delivery of defense equipment to the Syrian government to use in its counter-terrorism efforts.

US to Carry 'Long Discussions' With Russia on Activities in Syria - Obama
On Sunday, Lavrov said he questioned Washington’s commitment to defeating the Islamic State after a colleague from the anti-ISIL coalition informed him that US commanders have called off airstrikes against the terrorist group positions.

State Department spokesperson John Kirby said on Monday that he had not seen any indications the US military held up airstrikes against the ISIL.

The United States is leading a 62-nation coalition against the ISIL whose objective is to eliminate the terrorist group. In nearly two years, the ISIL has occupied vast territories in Syria and Iraq, proclaiming a caliphate there.

The coalition has conducted more than 6,500 airstrikes against the ISIL since August 2014. US intelligence has estimated that the military campaign against the terrorist group has eliminated 10,000 of its fighters.

000000
Popular comments
"..The coalition has conducted more than 6,500 airstrikes against the ISIL since August 2014. US intelligence has estimated that the military campaign against the terrorist group has eliminated 10,000 of its fighters.." WOWW! That means the U.S. has eliminated 1,5 IS-Fighters with every single airstrike, the U.S. will win this.. sometimes!
20 September 2015, 10:37 GMT
000000
Newsfeed
0
New firstOld first
loader
LIVE
Заголовок открываемого материала
Access to the chat has been blocked for violating the rules . You will be able to participate again through:∞. If you do not agree with the blocking, please use the feedback form
The discussion is closed. You can participate in the discussion within 24 hours after the publication of the article.
To participate in the discussion
log in or register
loader
Chats
Заголовок открываемого материала
Worldwide
InternationalEnglishEnglishMundoEspañolSpanish
Europe
DeutschlandDeutschGermanFranceFrançaisFrenchΕλλάδαΕλληνικάGreekItaliaItalianoItalianČeská republikaČeštinaCzechPolskaPolskiPolishСрбиjаСрпскиSerbianLatvijaLatviešuLatvianLietuvaLietuviųLithuanianMoldovaMoldoveneascăMoldavianБеларусьБеларускiBelarusian
Transcaucasia
ԱրմենիաՀայերենArmenianАҧсныАҧсышәалаAbkhazХуссар ИрыстонИронауОssetianსაქართველოქართულიGeorgianAzərbaycanАzərbaycancaAzerbaijani
Middle East
Sputnik عربيArabicArabicTürkiyeTürkçeTurkishSputnik ایرانPersianPersianSputnik افغانستانDariDari
Central Asia
ҚазақстанҚазақ тіліKazakhКыргызстанКыргызчаKyrgyzOʻzbekistonЎзбекчаUzbekТоҷикистонТоҷикӣTajik
East & Southeast Asia
Việt NamTiếng ViệtVietnamese日本日本語Japanese俄罗斯卫星通讯社中文（简体）Chinese (simplified)俄罗斯卫星通讯社中文（繁体）Chinese (traditional)
South America
BrasilPortuguêsPortuguese
NewsfeedBreaking
14:15 GMTRonaldo Will Cause as Many Problems as He Solves for Solskjaer, Ex-Liverpool Player Carragher Says
14:03 GMTXi Urges SCO to 'Resist' External Meddling After US, Australia Vow to Bolster Ties With Taiwan
14:02 GMTUN Security Council Holds Meeting on Afghanistan
13:39 GMTHitting US Debt Ceiling Could Trigger Recession, White House Says
13:32 GMTUnited Airlines Briefly Grounded Flights in US, Canada Due to Computer Issues, FAA Says
13:29 GMTDutch Acting Defense Minister Resigns Over Kabul Evacuations Chaos, Reports Suggest
13:27 GMTFrance Says It Cannot Trust Australia in Trade Talks After Canberra Ditched Joint Sub Deal
13:20 GMTPiers Morgan Says His New Job Will Be 'Stuff of Nightmares' for Meghan Markle
13:18 GMTIndonesia Wary of Australia's Plans to Acquire Nuclear Submarines
13:14 GMTUS Slaps New Hezbollah-Related Sanctions on Several Individuals
12:57 GMTPakistan Will Get ‘Badly Burnt’ If It Courts the Taliban Beyond a Point, Warns Author
12:51 GMTUS General Mark Milley Reportedly Downplayed George Floyd Protests' Severity in Talks With Trump
12:51 GMTIs Narendra Modi Emerging as the Most Sports Loving Indian Prime Minister?
12:28 GMTFAA Bans Drone Flights Over Texas Bridge After Thousands of Haitians Filmed Flocking to Area
12:27 GMT'Show Got It Wrong': Priyanka Chopra Apologises After Taking Flak Over 'The Activist' Format
12:05 GMTNicki Minaj Tweet That COVID-19 Vaccines Cause Impotence Sparks Protest Outside CDC HQs - Video
12:01 GMTPelosi Asked After Capitol Riot If WH Staff Did Anything But 'Kiss' Trump's 'Fat Butt', Book Claims
11:48 GMTArmenian Police to Block Streets Near Central Square Due to Planned Rallies
11:32 GMTUK Military 'Actively Recruiting' New Spies for Deployment in Asian Region Amid AUKUS-Caused Waves
11:14 GMTPunjabi Activists Clash With Police in Delhi During Anti-Farm Law Protests - Video