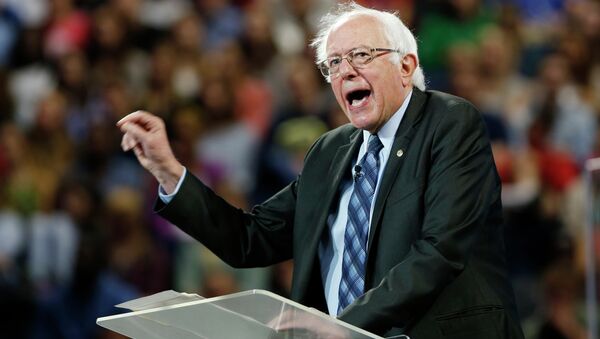 © AP Photo / Steve Helber
Subscribe
In an extremely bold move, Bernie Sanders made a campaign stop at Liberty University, a prominent private conservative Christian institution in Virginia, and spoke on the fact that the issue of income and wealth inequality should unite people across party lines.

The university, founded in the 1970s by Christian televangelist Jerry Falwell, is a typical stop for presidential candidates on the other side of the aisle, as "coming to Liberty for a Republican presidential candidate is kind of like the East Coast version of speaking at the Reagan library," Sweet Briar College Political Science Professor Steve Bragaw wrote on the school’s website.

Sanders spoke on the importance of maintaining civil discourse between parties, and many in the crowd cheered in agreement.

"It is easy to go out and talk to people who agree with you," Sanders said, noting his increasingly popular campaign stops where most of the crowd follows the same line of beliefs as he. "But it is harder, but not less important, for us to try and communicate with those who do not agree with us on every issue." 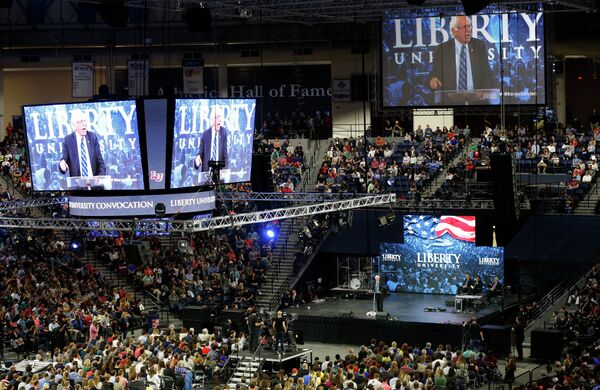 The Vermont senator, who now has considerable leads over rival Hillary Clinton in the battleground states of Iowa and New Hampshire, also spoke on his agreement with the Pope that the financial crisis "originated in a profound human crisis.”

"It would be hard to make the case that we are a just society or anything resembling a just society today," Sanders said. "In the United States of America today, there is massive injustice in terms of income and wealth inequality."

His speech remained largely non-partisan until the question and answer session, where Sanders was confronted with the topic of abortion by Liberty senior vice president David Nasser.

“Sen. Sanders, you have talked in your campaign about how it is immoral to protect the billionaire class at the expense of the most vulnerable in society — children,” Nasser said. “A majority of Christians would agree with you, but would also go further and say that children in the womb need our protection even more. How do you reconcile the two in your mind?” he asked.

Despite finding himself in what many would consider a lion’s den for a pro-choice politician, Sanders held his ground.  He began by explaining how he supports women and families who make the very difficult decision to terminate a pregnancy, and noted that conservatives generally want the government out of their personal life choices.

He then went on to tell the largely conservative audience that he believes Republicans only care about children while they are in the womb.

“At a time when children in America are going hungry, the Republican budget cut billions of dollars in nutrition programs, including money for the WIC program, which goes to low-income pregnant women and their babies. And to add insult to injury in that budget, the Republicans provided over $250 billion over a 10-year period in tax breaks to the top two tenths of one percent,” Sanders said.

“I don’t think that is a moral budget,” he concluded.

Joe Biden to a Room of Clinton Donors: Sanders is 'Doing a Helluva Job'
According to the latest polls, Sanders holds 52 percent support among Democratic primary voters in New Hampshire, while former frontrunner Hillary Clinton is down to 30 percent.

In Iowa, Sanders is now ahead by 10 points, with 43 percent to Clinton's 33 percent.

Even Sanders himself is surprised by the massive support he has been generating.

"Did I think [the issues] would resonate as quickly as they have?" he asked CNN’s Wolf Blitzer on Thursday. "The answer is no."