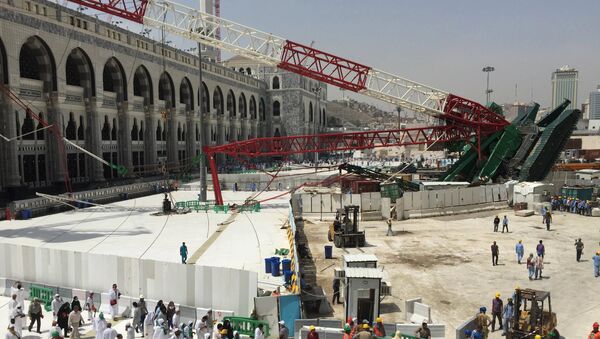 Finian Cunningham
All materials
Anyone inclined to believe in divine retribution will find pause for thought over the latest calamity in Saudi Arabia, where a giant crane smashed into its Grand Mosque over the weekend, killing more than 100 pilgrims.

Scores Dead as Crane Crashes Into Mecca's Grand Mosque
Worshippers were gathering in the top mosque at Mecca for Friday evening prayers when one of the construction cranes foresting the holy city toppled, crashing through the roof and crushing hundreds of people below. Blood-splattered corpses lay strewn across the floor of the mosque, as shell-shocked survivors struggled to make sense of the freak disaster. Apparently, heavy rain and gusts of wind had caused the metallic structure to keel over.

The incident comes as nearly two million Muslims from across the globe are due to gather in Mecca during the next two weeks for the annual Hajj pilgrimage. Mecca — reputed to be the birthplace of the Prophet Mohammed — is undergoing extensive property development. Some critics have accused the Saudi authorities of exploiting the unique spiritual status of the city in order to make way for expensive apartments and hotels to generate lucrative tourism profits.

Among the construction companies to have secured juicy contracts are firms owned by the ruling House of Saud. There are strong suspicions of cronyism and bribery plying the construction boom in Mecca. This has in turn led to lax regulation in safety standards and building controls. The use of cheap unskilled labour from the Indian subcontinent is also a factor.

Mecca and the other Saudi city Medina associated with the Prophet are considered the two holiest Muslim sites on Earth. Saudi King Salman, as for his predecessors, is referred to formally as "the custodian of the two holiest sites of Islam", as well as being the sovereign leader of Saudi Arabia.

Nevertheless, for many Muslims around the world, the House of Saud is seen as a disgrace to Islam. In recent years, the Saudi rulers are heavily implicated in sowing sectarian violence between Sunni and Shia branches of the faithful across the entire region. The House of Saud professes a fundamentalist version of Sunni Islam known as Wahhabism, which views others Muslim sects with disdain as somehow being "apostate" or "infidel".

Saudis Refusing Syrian Refugees, Offer to Build Mosques in Germany Instead
The religious chauvinism of the Saudi rulers is closely aligned with the extremist views and practices of sundry Al Qaeda-linked terror groups, including the so-called Islamic State network in Syria and Iraq. The Wahhabi condemnation of Shia Muslims as "heretics", applied also to non-aligned Sunnis and Christians, explains why these terror groups have persecuted such communities with ruthless beheadings and other barbaric abuses.

But the link between the Saudi rulers and the al-Qaeda-type extremistsis much more than an abstract sharing of sectarian religious views.

The Saudi regime is known to have funnelled billions of dollars and weapons into these terror networks as proxies for pursuing its geopolitical schemes. Iran — seen as a "heretic" Shia power — is the recurring bane of Saudi obsession.

Washington and the other Western powers, including the Israeli regime, are fully supportive of the House of Saud and the related Gulfmonarchies in Kuwait, Bahrain, Qatar, the United Arab Emirates and Oman. These family-run oil-rich entities are armed to the teeth by theUS, Britain, France and Germany — making them among the mostrepressive autocrats on earth.

The terror links of the Saudis and other Gulf Arab dictators is not an impediment to Western alliance with these despots. Far from it.

The evidence shows that the Western powers — despite their bombastic claims of fighting terrorism — have in fact colluded all the way with the Gulf monarchies to use these same terror groups as proxies in their shared geopolitical agenda of regime change in the Middle East.

West Admits ISIL, Not Assad’s Gov’t Main Threat to Middle East – Lavrov
Russia's Foreign Minister Sergei Lavrov this weekend put his finger onthe telling contradiction of Western policy in the Middle East. Lavrov was defending Russia's recent stepping up of military aid to Syria's President Bashar al-Assad. The Syrian national army is the strongest, most effective opposing force to the Islamic State and other terror groups, said Lavrov. So, logically, he added, if Western countries claim to be trying to defeat such terror networks, then they should be supporting the Syrian government, not undermining it. Of course, the answer to that contradiction is that the Western powers and their Saudi and Gulf allies are not at all interested in defeating the terror groups. They are only interested in regime change and have infact been responsible for unleashing the terror phenomenon for that very purpose.

The same criminal conspiracy is seen to even greater extent in Yemen.For the past six months, the Arabian Peninsula country has been bombed on a daily basis by a so-called coalition headed up by Saudi Arabia and the other Gulf despots. America and Britain are supplying the warplanes and munitions, as well as aerial coordination, for this war of aggression.

The Western-Arab military intervention has no mandate from the UN Security Council.

The only "mandate" it has is from their deposed and discredited former puppet president Mansour Hadi.

The Enemy of My Enemy: Petraeus Urges Unleashing Al-Qaeda on Islamic State
Fighting on the same side as the Western-Arab aerial coalition in Yemen are the al-Qaeda-linked terror networks. The shared aim is to defeat a popular Yemeni uprising, led by the Houthi rebels. If the popular uprising, which emerged in Yemen as early as 2011 and which ousted the Western-Saudi-backed Hadi regime earlier this year, were to succeed, then this democratic outcome would threaten the status quo of the Arab dictatorships across the region. This despotism is the cornerstone for Western hegemony in the oil-rich strategic enclave, and that is why Yemen is being pounded mercilessly.

In targeting Yemen, the Western-Saudi coalition has spared no-one and nothing. Residential homes, hospitals, schools, water and power utilities, markets and mosques have been bombed, with a civilian death toll well over 5,000. Even humanitarian aid convoys have been hit. The head of the UN's High Commission for Refugees, Antoine Grand, told the BBC that two of his staff were killed last week in a "deliberate" Saudi air strike on their convoy.

Over the weekend, 10 Yemeni civilians were reportedly killed when a village in the southern province of Taiz was bombed by Saudi warplanes. Meanwhile, in the capital Sanaa innumerable casualties were feared after dozens of poor residential neighbourhoods were hit by airstrikes.

This carnage of crimes against humanity — inflicted largely within ternational silence and certainly a shameful muteness from the UN secretary general Ban Ki Moon — is against the horrendous backdrop of nearly half of Yemen's 24 million population facing starvation because of a sea and air blockade imposed on the country by the Western-Saudi-led coalition.

This is nothing short of genocide — committed against the poorest Muslim nation in the Arab region.

But never mind. Let's cut to a "prayer-break". Perversely, the House of Saud — the self-declared custodian of Islamic sanctities — dares at the same time to host the annual Hajj pilgrimage. If the latter ritualis supposed to offer thanks and obedience to the Almighty, the sickening audacity is surely tempting fate.