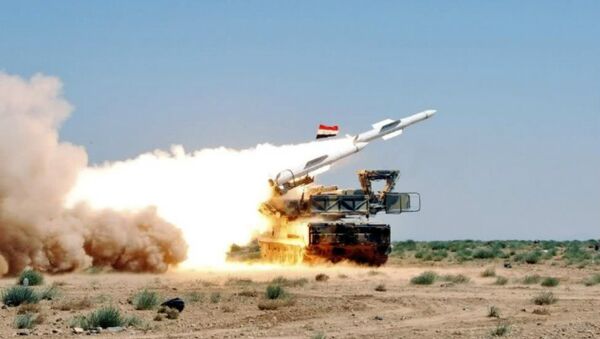 © Photo : SANA
Subscribe
International
India
Africa
The absence of strategic and tactical-level military-to-military communication between Russian advisors and US aircraft on bombing missions in Syria poses imminent risks of unintended military incidents and needs to change, according to US-based defense news site Defense One.

Russia Hands Over Humanitarian Aid to Syrian Government
With Russian weapons, equipment and humanitarian supplies being ferried to Syria's western provinces with the help of Russian air and naval resources, while the US continues to lead its air campaign against the Islamic State terror group in the country's east, some experts are concerned that the lack of coordination could lead to unintended military incidents and casualties as the two powers find themselves concentrating their forces in the war-torn country.

NATO Supreme Allied Commander James Stavridis told Defense One that "it is very dangerous to have both Russian and US troops in a confined battle space, essentially on opposite sides of a civil war, without contact for deconfliction of any combat or support activities." The former commander emphasized that "open communication at the strategic and tactical level are both important."

Stavridis cited the practice of US and Soviet naval forces sharing detailed action plans during the Cold War to avoid accidental escalation, noting that "we need similar dialogue, and possibly such protocols, to avoid incidents in Syria."

Syrian Conflict Can't Be Resolved Without Putin – German Politicians
Stavridis's comments follow on remarks made Friday by a spokesman for US Central Command, noted in a regular press briefing that "to my knowledge there is no military-to-military contact at this point" between Russia and the US-led coalition. "We're keeping an eye on the Russian situation there, but right now again there's really no deconfliction to do." The spokesman added that he would not "speculate or talk about hypotheticals" regarding "Russian military or air activity" in the area.

Earlier this month, Western media were driven into a frenzy after 'discovering' the presence of Russian military advisors in Syria. On Thursday, Russian Foreign Minister Sergei Lavrov confirmed that the Russian military personnel are present in the country, but highlighted that this was not something that should have surprised or shocked anyone.

Lavrov Confirms Russian Military Present in Syria to Deliver Arms to Army
Over the past week, Lavrov and other Russian officials have repeatedly stressed that the Russian military does not have a combat role in the conflict-torn country, and that the Russian weapons and equipment delivered to Syria are provided "in accordance with existing contracts" and in full compliance with international law.

In his comments Thursday, the foreign minister said that Moscow would whole-heartedly support direct military-to-military communications between Russia and NATO, cut off by the US amid the crisis in Ukraine. He added that Russia fully understands the importance of such contacts in avoiding "undesired, unintended incidents. We are always in favor of military people talking to each other in a professional way. They understand each other very well," he noted. Lavrov noted that at the moment, it is the US side that "wants those channels frozen."

Differing Ideas on How to Crush ISIL for Good

Defense One warned that the presence of both Russian and American forces and their allies in Syria could have unintended consequences, including military incidents between the two powers. While Russia has long-maintained that the Syrian army is now the only force capable of confronting the Islamic State on the ground in Syria, the US has been "deepening agreements with Turkey to use its bases and clear its border of ISIS fighters" and "training and equipping Syrian fighters and reinserting them into the fight in Syria, where it has vowed to defend them against ISIL or Assad."

Russian and American strategists are openly divided when it comes to ideas on how to crush ISIL once and for all. In its regular press briefing Friday, the Pentagon noted that while the US would "welcome constructive anti-ISIL efforts by Russia…it can't start with, and it can't be a function of, continued support to the Assad regime."

World
West Admits ISIL, Not Assad’s Gov’t Main Threat to Middle East – Lavrov
Lavrov offered a response Sunday, in an interview for Russian television.  The foreign minister noted that the anti-ISIL coalition would be more efficient in its anti-ISIL campaign if it cooperated with Damascus, stating that air strikes will never suffice, and that if the coalition's "goal is to prevent the consolidation of Iraqi and Syrian territories as the heartland of an ISIL-promoted caliphate, they should focus on helping those who are fighting these rebels on the ground –the Iraqi army, the Iraqi Kurds, the Syrian army and Syrian Kurdish militias." He added that attempts to withdraw "the Syrian army from the fight against the Islamic State" would be "absurd."

Syria has been mired in a bloody civil war since 2011, with forces loyal to President Assad fighting several opposition groups, among them several strains of radical Islamists, including al-Qaeda affiliate al-Nusra and elements which have since morphed into the Islamic State. The US, Turkey and Saudi Arabia have supported various anti-Assad groups over that time, with the US and Turkey presently settling on what they say are 'moderate' Syrian opposition forces, while Russia maintains that Assad is the only legitimate, democratically elected authority in the country.