US, Foreign Meddling and a Fight for Oil Fueling Syrian Civil War? 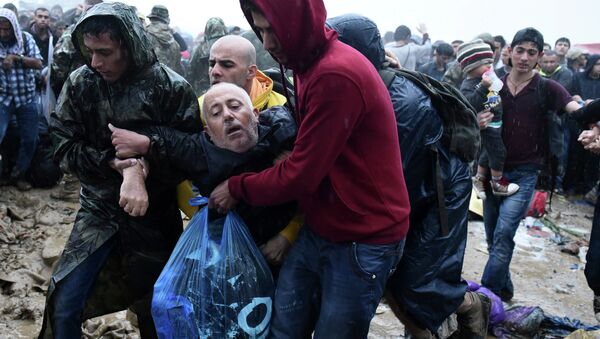 © AP Photo / Giannis Papanikos
Subscribe
Images of three-year-old Aylan Kurdi’s body washing up on the Mediterranean shores after his family tried escaping war-ravaged Syria sparked international outrage, and brought attention back to a bloody, four-year-long conflict that has cost the lives of hundreds of thousands of people and displaced millions.

An online feature is taking the lens off sectarian divide as the cause of the Syrian conflict, and focused on some overlooked factors: foreign intervention and a competition for oil resources, pointing a strong finger right at the United States.

UK Arms Supplies to Saudi Arabia 'Quietly' Fuel Yemen Conflict
Leaked US State Department cables dated as far back as 2006 suggest that Israel ordered the United States to overthrow the Syrian government by “instigating civil strife and sectarianism through partnership with nations like Saudi Arabia, Turkey, Qatar and even Egypt” in order to weaken Tel Aviv’s enemy Iran—Syria’s ally—and the terrorist group Hezbolla.

At the time tensions were rising between the U.S., the European Union and Russia amid concerns that Europe’s gas market would be dominated by Russian gas giant Gazprom.

Turkey is Gazprom’s second largest customer. According to Mnar Muhawesh, editor of MintPress News, Turkey was “harboring Ottoman-like ambitions of becoming a strategic crossroads for the export of Russian, Caspian-Central Asian, Iraqi and Iranian oil and even gas to Europe.”

The Guardian reported that in 2009, Syrian President Bashar al-Assad  “refused to sign a proposed agreement with Qatar that would run a pipeline from the latter's North field, contiguous with Iran's South Pars field, through Saudi Arabia, Jordan, Syria and on to Turkey, with a view to supply European markets — albeit crucially bypassing Russia.”

Syrian Americans to Rally in Washington Calling on US to Allow More Refugees
Syria chose to not move against its ally Russia—Europe’s largest supplier of gas.

Instead, Assad in 2010 agreed to an Iran-Iraq-Syria pipeline that would allow Iran to supply Europe with gas from its vast South Pars field shared with Qatar.

After Assad refused to sign the deal, Turkey tried persuading him to reform the Iranian pipeline and to reconsider the proposed Qatar-Turkey pipeline, which Mintpress suggests “would ultimately satisfy Turkey and the Gulf Arab nations’ quest for dominance over gas supplies.”

Muhawesh argues that Assad’s refusal to comply with these demands led Turkey and her allies to “engineer” the Syrian civil war, which launched in 2011 when Syrian citizens began holding mass demonstrations calling for reform, Democracy and the removal of President Assad.

According to the MintPress piece, U.S. State Department cables indicate that members of the CIA were in Syria in 2011 to “instigate” demonstrations and eventually develop ties with armed rebels.

Migrants, Refugees, Clandestines and… Jihadis
Between 2011 and 2012, several states began to publicly call for the ousting of Assad. These included members of a coalition called “The Friends of the People of Syria,” which comprises Turkey, Qatar, Saudi Arabia, the U.S., Britain and France.

The former three began working together to finance and arm Syrian rebel groups in 2012, according to Wikileaks documents.

The Guardian notes, “It would seem that contradictory self-serving Saudi and Qatari oil interests are pulling the strings of an equally self-serving oil-focused US policy in Syria, if not the wider region. It is this — the problem of establishing a pliable opposition which the US and its oil allies feel confident will play ball, pipeline-style, in a post-Assad Syria — that will determine the nature of any prospective intervention: not concern for Syrian life.”

Rebels Without a Clue: US Intelligence Doctored to Reflect Spin on ISIL
According to Muhawesh, the coalition’s role in this power struggle was simple: Divide and conquer.

The article states, “Although the war is being sold to the public as a Sunni-Shiite conflict, so-called Sunni groups like ISIS, the Syrian al-Qaida affiliate Jabhat al-Nusra (the Nusra Front) and even the ‘moderate’ Free Syrian Army have indiscriminately targeted Syria’s Sunnis, Shiites, Christians and Jews.

“The Syrian government army itself is over 80 percent Sunni, which indicates that the true agenda has been politically — not religiously — motivated.”

MintPress also highlighted the divide in Syria’s Sunni population by pointing out that in the conflict, Sunnis have joined conflicting groups including the Western-backed Free Syrian Army, al-Qaeda and ISIS.

The battle rages on and there is no clear winner. Blood continues to spill and refugees continue to flood borders of neighboring nations and even those in Europe.

MintPress’s outlook on the situation in Syria is dim.

“What was once a secular, diverse and peaceful nation, was looking more like it was on its way to becoming the next Afghanistan; its people living under Taliban-style rule as jihadists took over more land and conquered more cities.”

000000
Popular comments
It is hard for western observers to understand the dynamic in Syria because they never even remotely participated in a national struggle for survival.