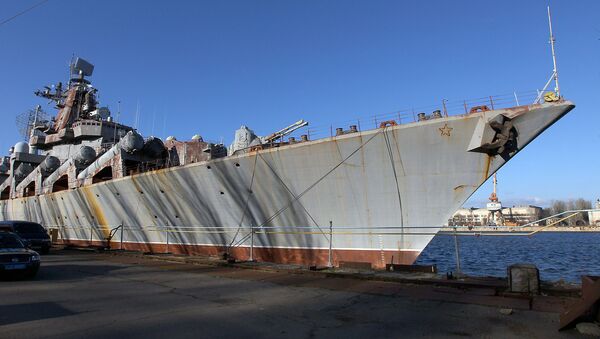 "The cruiser Ukrayina is a piece that has already been broken off from the state, and it will be sold," Haiduk said, adding that the money made from the sale will be allocated for the construction of new naval ships and boats.

According to Haiduk, the main reason for the sale of the cruiser is the fact that almost 80 percent of its weapons were made in the Soviet era.

He explained that the ship features navigation equipment and arms that are not produced in Ukraine.

In addition, the Ukrainian Navy has a spate of problems related to the infrastructure for the cruiser's deployment, Haiduk added.

It is worth noting that Kiev has repeatedly tried to sell the cruiser to no avail.

The Ukrayina is a Slava-class cruiser ordered by the Soviet Union in the early 1980s. The vessel was laid down in 1983 and launched in 1990 just before the collapse of the Soviet Union.

World
Russian Frigate Gives US Navy Ship Warm Welcome to Its Neighborhood
The lack of financing stalled work on the cruiser in the early 1990s and the ship was left unfinished. In 1993, she was withdrawn from the Russian Navy and passed to Ukraine.

Four years later, Ukraine announced that it had no need for the cruiser and was ready to sell it to foreign customers, including from those in China and India, who, however, showed no interest in the offer at the time. Currently, the cruiser sits docked and unfinished at the harbor of Nikolayev in southern Ukraine.

As for the the Slava-class cruisers, known as Project 1164 Atlant, they are a type of large, conventionally powered warships, designed and constructed for the Soviet Union and currently operated by the Russian Navy.