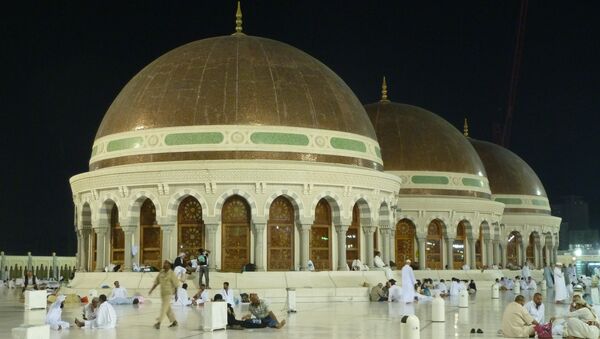 As Europe struggles to deal with an influx of refugees, the magnitude of which has not been seen since World War II, many are questioning the inaction of Gulf leaders in the crisis and their refusal to accept those fleeing the Syrian civil war, despite their affluence and capability to do so.

Some 3000 Refugees to Gather at Austrian-Hungarian Border on Thursday Night
According to UN estimates, roughly four million Syrians have fled their country as a result of the four year long civil war. The majority are fleeing to neighboring countries in the Middle East, many of which are already overpopulated and poor. Even Iraq, which is dealing with a violent spillover from the Syrian conflict, has accepted around 250,000 refugees.

Driven by the lack of resources in the countries that are welcoming them, refugees are making desperate journeys up to Europe, where they hope to find a better life. Last weekend alone, as many as 20,000 refugees entered Germany from Hungary by train, bus and foot.

"I am happy that Germany has become a country that many people outside of Germany now associate with hope," Angela Merkel said at a news conference in Berlin.

For refugees, that kind of hope has been absent in countries that are both geographically and culturally closer to Syrians, namely, the Gulf states. In the four years since the Syrian civil war began, the number of Syrian refugees in GCC countries remains at an even zero.

Instead, Gulf officials have defended themselves by saying that they are already paying millions in donations to the United Nations to help the refugees.

Saudi Arabia, which has offered to help build 200 mosques in Germany in an effort to help their Muslim brethren find a home in Europe, has conspicuously avoided welcoming a single one of these refugees despite having more than enough capacity to do so.

Mina city alone, located by Mecca, has the space and accommodations to house three million people. The 12 mile valley is filled with 10,000 air-conditioned tents, arranged in neat rows, and segregated into several camps. With the exception of the Hajj pilgrimage season, the space is deserted year round, providing ample room and living conditions for its residents.

Despite mounting criticism, Saudi Arabia and other GCC countries remain steadfast in their decision not to open their borders to refugees. Experts have suggested the reason may be rooted in Gulf monarchies’ unwillingness to allow politically vocal Arabs in their societies.

But the fact that Saudi Arabia and Qatar, both of which have funded rebels fighting in the Syrian civil war, have not welcomed a single refugee has sparked widespread criticism.  Many have noted that Gulf States have a greater obligation to resettle refugees due to their cultural affiliation. The criticism has inspired the Arabic hashtag #Welcoming_Syria’s_Refugees_is_a_Gulf_duty.

Yet, the only Syrians in these countries are ones that have been successful in obtaining either a tourist visa or a work permit. And even those are hard to come by, not only because they’re costly, but also because Gulf States have reportedly become more hesitant about granting such visas in light of the ongoing conflict.

Supporters of Gulf nations have given a myriad of excuses over why no refugees have been accepted, ranging from the logistical to the somewhat nonsensical.

"Qatar is very small and already donating to refugees in Jordan, Turkey, and northern Iraq," wrote Abdullah al-Athbah, editor in chief of Arab Newspaper. "For logistical reasons Qatar cannot take in large numbers of refugees so instead Qatar chooses to support them financially."

One Kuwaiti analyst, Fahd al-Shelaimi,  even suggested that refugees will simply feel out of place in hyper-modern, and hyper-luxurious Gulf nations.

"Kuwait and Gulf states are expensive and don’t suit refugee life, it suits work. Transportation in Kuwait is expensive too, while living in Lebanon or Turkey is cheaper, so money paid to refugees with go further," he said in a TV interview.

Both comments reflect disconnectedness from the reality and gravity of the refugee crisis. For one thing, European countries are far more likely to present a challenging environment for refugees to adapt to, especially considering the cultural and linguistic gaps. Yet, Germany has taken in 22,000 refugees to the zero taken in by the GCC.

"The Gulf states often complain that the Arabic language is underuse and that our culture is under threat due to the large number of foreign immigrants," UAE commentator Sultan al-Saud noted. "Here is an opportunity to host a group of people who can help alleviate such concerns and are in need of refuge, fleeing a brutal war."