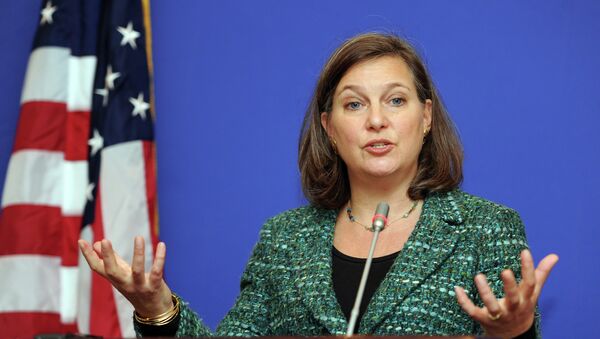 Victoria Nuland has flown to Kiev, Ukraine, to participate in a strategy meeting.

WASHINGTON (Sputnik) — US Assistant Secretary of State for European and Eurasian Affairs Victoria Nuland has flown to Kiev, Ukraine, to participate in the "Yalta European Strategy (YES) Annual Meeting", the Department of State announced.

"[Nuland] will also meet with senior Ukrainian officials, party leaders and civil society members to discuss a range of bilateral and regional issues," the State Department said on Thursday.

War Profiteers: Victoria Nuland and Co. Making Money on Endless Wars
Nuland departed on Thursday and will follow her trip to Kiev with a visit to Nicosia, Cyprus on September 14-15, where she will meet with senior Cypriot officials to discuss further advancing bilateral relations, according to the State Department.

Nuland is a former chief of staff to Deputy Secretary of State Strobe Talbott under US President Bill Clinton. She also served as principal foreign policy advisor to Vice President Dick Cheney and then as US ambassador to NATO.

More recently, Nuland was the center of controversy after she was revealed in a leaked January 28, 2014 recorded phone conversation with US Ambassador to Ukraine Geoffrey Pyatt, in which she made an obscene reference to the European Union while discussing her preference for a prime minister of Ukraine.