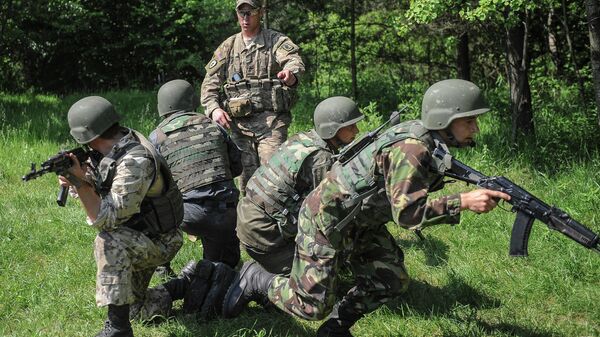 © AP Photo / Andrew Kravchenko, Pool
Subscribe
International
India
Africa
The US military will soon start training Ukrainian military forces, said a Senator who recently visited Ukraine – despite yearlong accusations from Washington that Moscow has been fueling unrest in the country.

Senator Jack Reed, the top Democrat on the Senate Armed Services Committee, said on Wednesday that US Army paratroopers are training Ukraine's National Guard forces at a base in western Ukraine, and will soon begin working with Ukraine's regular military, The Hill reported.

"The transition was underway to train defense units, regular military units. The National Guard finishes training within a week or two and then it'll be their formal military's that's being trained," said Reed, of Rhode Island.

The Obama administration has provided Ukrainian forces with more than $200 million in non-lethal military assistance, but has been reluctant to fulfill Kiev’s requests for lethal aid.

Reed, though, said he supports providing Ukrainian forces with lethal aid, and outlined three steps to do so, according to the Hill:

One step that should be explored, Reed said, is taking Ukrainian forces outside the country and training them on the provided weapon systems, "so they're ready."

"Second is the possibility of transferring some of these systems from other countries into Ukraine, which doesn't raise quite the visibility of the transfer."

"And then there's the possibility of taking some of our systems and beginning to… deploy them to training areas particularly so that they can train on them and have them ready to move into areas of conflict."

Since 2014, the US and its western allies have imposed a series of sanctions on Moscow over its alleged involvement in the conflict in Ukraine, spurring the deterioration of relations between Moscow and Washington, with the latter accusing the former of meddling in Kiev’s affairs.

Moscow has repeatedly warned Washington that its interference in the Ukrainian civil war will only make matters worse.