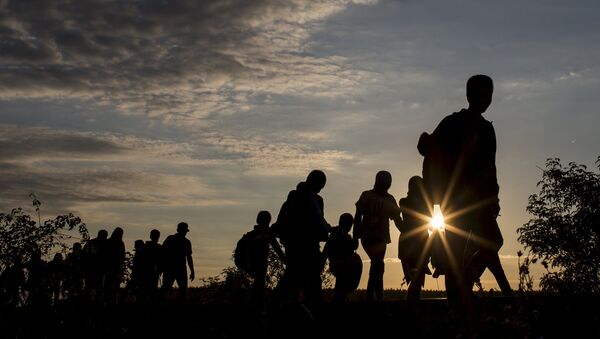 © REUTERS / Marko Djurica
Subscribe
The head of the Bruges Group think tank claims that the unwillingness of the United States in hosting sound numbers of refugees from Syria is "not surprising".

MOSCOW (Sputnik), Alexander Mosesov — The unwillingness of the United States in hosting sound numbers of refugees from Syria is "not surprising", the head of the Bruges Group think tank told Sputnik on Thursday.

Earlier in the day, US President Barack Obama ordered his administration to admit up to 10,000 more Syrian refugees in the next fiscal year. However, that is still four times less than Germany is expected to accept over the course of two years.

"Countries have only a very selective interest to refugees and America will only take a small proportion… It's not surprising that America is unwilling to take any immigrants [from Syria]," Robert Oulds said.

US to Take in Up to 10,000 Syrian Refugees Next Fiscal Year - White House
Oulds, who is also a UK Conservative Party member, added that European countries are selective as well and tend to turn a blind eye to other refugee crises including the one that was caused by the hostilities in Ukraine.

"There has been a refugee crisis for several years in Europe already, that is one million people that had to flee Eastern Ukraine to Russia because of the actions of the Ukrainian army and the various extremist militias attached to the Ukrainian Armed Forces," he said.

According to Russia's Federal Migration Service, more than 1 million people fled to Russia following the outbreak of the civil war in Ukraine, of whom approximately 600,000 decided to settle there permanently.

"That, of course, is hardly ever mentioned in the Western media. It's only when the people are knocking on the door of the EU it is becoming an issue," Oulds concluded.