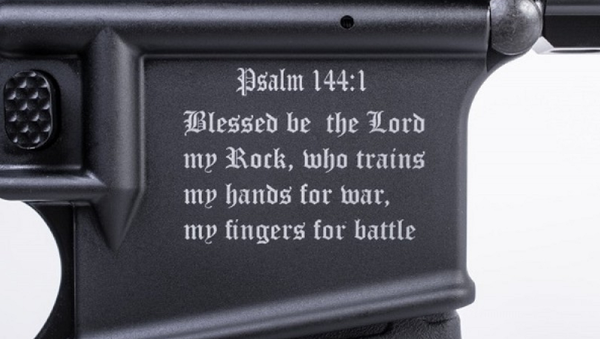 A gun manufacturer in Florida created a ‘Crusader’ assault rifle with a Bible verse on it designed for Christian hands only, a verse “preventing” it from being used by Muslims.

“Off the cuff I said I’d like to have a gun that if a Muslim terrorist picked it up a bolt of lightning would hit and knock him dead,” he said.

Thomas further said that the basic aim behind writing a verse from the Bible, “Blessed be the Lord my Rock, who trains my hands for war, my fingers for battle” on the rifle was to ensure that only like-minded people would purchase and use the weapon.

Reverend Denounces US ‘Love Affair’ With Guns
Besides the verse written on one side, the AR-15 assault rifle has a Knight’s Templar Long Cross – a symbol of the Christian Crusaders to reclaim the Holy Land from Muslims — laser-etched on the other side.

The rifle, which carries the price tag of $1,395, has drawn immediate criticism from the Council on American-Islamic Relations of Florida (CAIR-FL) soon after its launch on Wednesday.

“Is it designed for Christian terrorists?” asked Hasan Shibly, executive director of CAIR-FL, who said that out of 205 mass killings in the US this year, only one involved a Muslim.

“Sadly, this manufacturer’s fancy new gun won’t do anything to stop the real threat in America: the escalating problem of gun violence. This is just another shameful marketing ploy intended to profit from the promotion of hatred, division, and violence,” the statement released by CAIR-FL read.