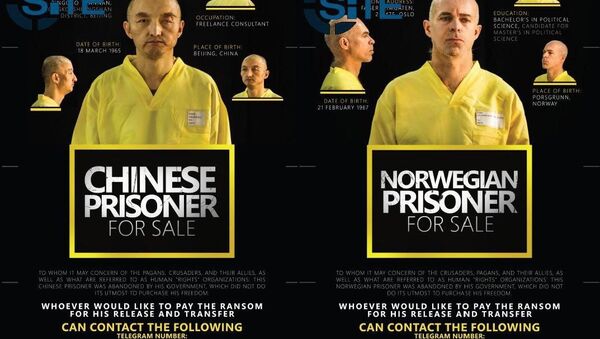 © Dabiq
Subscribe
The Islamic State claims to be holding a Chinese and a Norwegian hostage, and on Wednesday published photos of the captives in the terrorist group's online magazine.

The group posted photos of the two men wearing yellow prison outfits in the latest issue of its magazine Dabiq. The Norwegian man is identified as Ole Johan Grimsgaard-Ofstad, 48, from Oslo. The Chinese man is identified as Fan Jinghui, 50, a freelance consultant from Beijing.

The men are advertised as being "for sale," and the magazine lists a telegram number for "whoever would like to pay the ransom for his release and transfer."

The advertisements also note: "This is a limited time offer."

Both ads provide the men's home addresses and other personal information.

Norwegian Prime Minister Erna Solberg on Wednesday confirmed that a Norwegian man in his 40s was captured in January in Syria, adding that "everything indicates that (Islamic State) is behind it."

"The kidnappers have presented a series of demands and significant amounts of ransom money," she said, according to the AP. "We cannot give in and won't give into pressure from terrorists and criminals. Norway does not pay ransom."

The ads claim the men were "abandoned" by their governments, "which did not do [their] utmost to purchase [their] freedom.

The Islamic State typically advertises the Western hostages they capture, and has previously released gruesome videos of their executions. In February, the group released a video of a Jordanian pilot being burned alive in a cage.