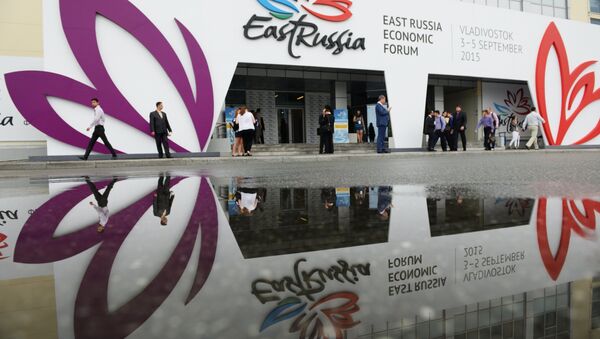 A set of agreements reached by Gazprom with some of Europe’s biggest energy companies during the recent Eastern Economic Forum in Vladivostok proves that European companies plan to continue working in the country, Judy Dempsey, an analyst for Carnegie Europe, wrote.

Gazprom to Confirm Business Plan for Nord Stream-2 in January
According to the analyst, one of the most important was the revival of an asset swap between the Russian gas giant and Wintershall, the energy division of BASF.

In 2014, the deal was abandoned due to tensions over the Ukrainian crisis.

Dempsey pointed out that the deals clinched at the Vladivostok forum show that major European energy companies have no intention to quit Russia. They also reveal that "Gazprom wants to tie Europe’s lucrative gas market more closely to Russia."

What is more important, Dempsey underscored, the deals show that Russia is determined to abandon Ukraine as the major transit route for Russian gas to European markets.

According to the terms of the deal between Gazprom and Wintershall, the German company will control a stake of 25 percent in the Urengoy gas fields of Siberia. The fields will be developed by both companies.

Russia
Russia’s Eastern Economic Forum Ends With Contracts Worth $19Bln
Wintershall will transfer to Gazprom its gas storage and trading business in Germany as well as a stake in its Austrian business. Gazprom will also receive a 50 percent stake in Wintershall’s exploration and production of oil and gas in the North Sea.

The second deal involves Gazprom and a consortium of European companies to build a new Nord Stream pipeline. Gazprom will receive a stake of 51 percent in the new company, New European Pipeline AG.

The agreement "will enable Russia to send more of its gas directly to Germany, bypassing Ukraine," she pointed out.

The third deal involves OMV’s participation in the Urengoy oil and gas fields, the analyst wrote.

Under the terms of the deal, OMV will acquire a 24.8 percent stake in the project in exchange for Gazprom obtaining some of the assets of OMV.

"Together, these deals mean that Europe’s big energy companies want to return to business as usual with Russia, despite the continuing conflict in Ukraine and the EU’s continuing sanctions on Russia," the analyst assumed.

Russia in its turn needs European technologies and Europe’s reliable markets, according to Dempsey.