Higher Sea Levels, El Nino May Increase Floods in Some US Cities 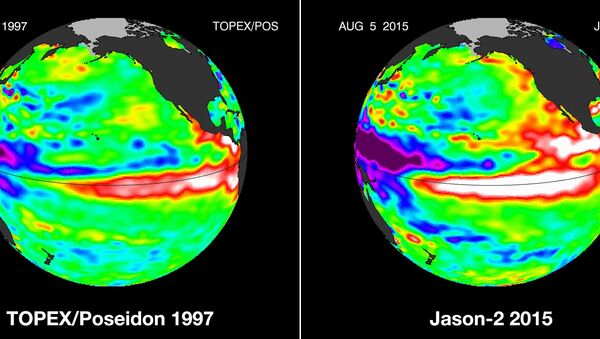 © AP Photo / NASA
Subscribe
A US National Oceanic and Atmospheric Administration report reveals that more US cities are likely to experience a higher number of nuisance flooding into April amid a rise in sea levels and greater frequency in storms.

WASHINGTON (Sputnik) — More US cities are likely to experience a higher number of nuisance flooding into April amid a rise in sea levels and greater frequency in storms, a US National Oceanic and Atmospheric Administration (NOAA) report revealed.

"We know that nuisance flooding is happening more often because of rising sea levels, but it is important to recognize that weather and ocean patterns brought on by El Niño can compound this trend," NOAA scientist William Sweet said.

NOAA predicts that the cities in the mid-Atlantic and West Coast regions of the United States could experience as much as a 33 to 125 percent increase in the amount of nuisance flooding days.

Global Warming Looking to Heat Up in 2015 With El Nino
The US states of Virginia, New Jersey and California, NOAA stated, are those that experienced nuisance flooding days in 2014 and are likely to have more in 2015 with El Nino.

NOAA found that the city of Norfolk, Virginia is likely to experience a 125 percent increase in nuisance flood days in 2015 with El Niño over a projected eight days.

Since the 1960s, the United States has experienced a 300 percent to 925 percent increase in nuisance tidal flooding, which will likely "cross inundation tipping points in the coming decades as tides become higher and sea level rise," NOAA argued.