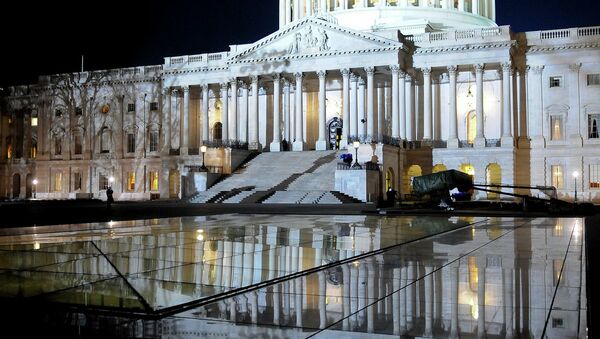 Subscribe
Spokesman for the Orthodox Jews Against Zionism movement Rabbi Dovid Feldman claims that US lawmakers are being bullied to oppose the Iran nuclear agreement by pro-Israeli lobbyists who do not speak for the Jewish people as a whole.

WASHINGTON (Sputnik), Leandra Bernstein — US lawmakers are being bullied to oppose the Iran nuclear agreement by pro-Israeli lobbyists who do not speak for the Jewish people as a whole, spokesman for the Orthodox Jews Against Zionism movement Rabbi Dovid Feldman told Sputnik.

"When these pro-Israeli supporters come on Capitol Hill… they are coming and intimidating our representatives. They are coming to blame people to be anti-Semitic," Feldman said on Wednesday.

Rabbi Feldman and a group of approximately 50 other activists representing orthodox Jews in the United States and abroad, protested a Wednesday rally on Capitol Hill held by opponents of the Iranian nuclear agreement.

A number of pro-Israeli groups, including the American Israel Public Affairs Committee (AIPAC) and members of the Jewish Institute for National Security Affairs, or JINSA, joined a rally of opponents of the Iran nuclear agreement on Capitol Hill on Wednesday.

US to Use Military Force Against Iran if Nuke Deal Violated - Clinton
The rally, addressed by Republican presidential hopefuls Donald Trump and Ted Cruz, was part of a final push for the Congress to vote against the agreement.

"This pro-Israeli intimidation on Capitol Hill is not in our name," Feldman said. "None of these spokespeople represent all Jewish people."

Those who oppose the Iran deal on the basis of support for Israel are very upset over the Jews Against Zionism movement, Feldman explained. "They are so indoctrinated that the only [thing] that makes you Jewish… is the support of the state of Israel, which is so ridiculous and so painful," he said.

The Israeli lobby has been increasingly active in Washington in the months leading up the successful negotiation of the nuclear agreement between Iran and the P5+1 group of countries comprised of the United States, Russia, China, France and the United Kingdom plus Germany.

In March, Israeli Prime Minister Benjamin Netanyahu addressed a joint session of Congress ahead of a key deadline in the nuclear negotiations to encourage members of Congress to oppose the deal.

Feldman described the appearance as "embarrassing," stating that Netanyahu was "representing himself" and not the Jewish people as a whole.

The Israeli lobby has a powerful influence on US lawmakers, with AIPAC spending $3.1 million to lobby the US federal government in 2014, according to the independent government watchdog group, Open Secrets.

The Orthodox Jews Against Zionism were originally founded in Jerusalem in 1938 in opposition to the efforts of the international Zionist movement to create a Jewish State of Israel, an act they believe violates fundamental teachings of the Jewish faith.