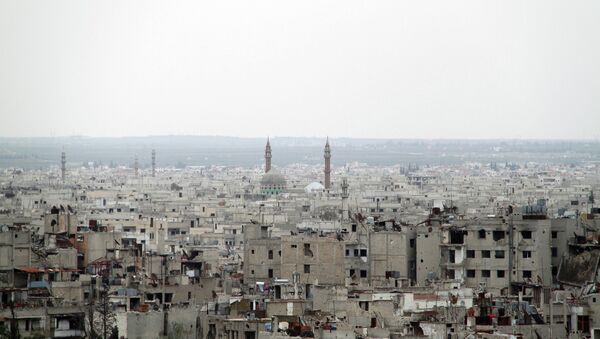 US sought to create “paranoia” of a possible coup in Syria to provoke Damascus to overreact, WikiLeaks founder and chief editor Julian Assange said Wednesday.

MOSCOW (Sputnik) – He cited a 2006 US diplomatic cable from the then-ambassador to Syria, William Roebuck, outlining a “plan for the overthrow of the [President Bashar] Assad government in Syria.”

“[The US plan was] to use a number of different factors to create paranoia within the Syrian government to push it to overreact, to make it fear that there is a coup,” Assange told RT in an interview.

Russia, Iran and China Trying to Stop West From Overthrowing Assad
Assange added that Washington was “using” Damascus’ attempts to fight the Islamic State terrorist organization “against it.”

Assange pointed to regional powers “around Syria looking to bite off pieces,” including Qatar, Saudi Arabia and Turkey. “Israel is also no doubt, if Syria is sufficiently destabilized, might be in a position where it can keep the Golan Heights forever, or even advance that territory,” he stressed.

In June, WikiLeaks published a batch of over 60,000 classified Saudi diplomatic cables bearing evidence of Riyadh’s role in the Syrian conflict that had led to the emergence of the Islamic State jihadist group. The leak sought to prove that in 2012 Saudi Arabia, Qatar and Turkey had a secret deal to topple Assad. Assange said in an interview that France, Britain and the United States had been also involved in the plot.